7 ways to get vaccinated without a needle 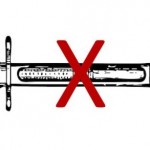 Vaccines are utterly crucial for preventing a whole host of different diseases. Yet many people refuse to get them. Why is that?

One possible reason is that some people are scared away by needles. So, in response, scientists have been developing needle-free vaccines — and they’ve made a few promising products so far. (Another reason people aren’t getting vaccinated is misinformation about the dangers of vaccines, which is a separate issue.)

This month, the Food and Drug Administration approved a new, needle-free way to get the flu vaccine: the Afluria microinjection. It uses a device that shoots a jet of vaccine liquid straight into the body.

This option is just one of several new and coming methods for more comfortable ways to get vaccinated. Here’s a list of what’s already on the market and what might be someday, too:

1) Microinjector vaccines
This fall, the Afluria flu vaccine’s new option uses a PharmaJet syringe, which shoots a high-pressure jet of fluid into the body without any needles. (The jet of liquid burrows itself into the skin.)
The maker of the technology doesn’t claim that the PharmaJet is any less painful than needles — only that the device can minimize fear and anxiety. Still, that’s no small thing: there’s research suggesting that deceasing anxiety can also decrease pain. For example, one study has shown that simply watching a video of a needle pricking someone else makes the experience of being poked more painful.

2) Nasal-spray vaccines
Another needle-free option is the nasal spray flu vaccine, FluMist, which has been around for many years. The big difference here is that the nasal spray requires the use of a live flu virus (albeit a weakened version), unlike standard flu shots. The Centers for Disease Control and Prevention recommends that 2-to-8-year-old children get the nasal spray, if available, because studies have shown that it works better for them than the standard shot.

3) Skin-injector vaccines
Most vaccines that people are familiar with use a needle to inject into the muscle. But vaccines such as Fluzone Intradermal use a tiny microneedle (about one-tenth the length of a normal one and far thinner) that only injects as far as the skin. Because the skin has a lot of immune cells in it, this injection also requires less vaccine than the traditional kind.

4) Microneedle-patch vaccines
Researchers at Georgia Tech and Emory University are working on painless patches of microneedles, which get pressed onto the skin, where they release the vaccine. The team has shown that a metal patch workedfor flu vaccines in mice. And one version even uses polymer microneedles that dissolve into the body. They’re also looking into letting people administer the vaccine patch themselves. (The company Vaxxas is working on a microneedle patch, too)

5) Inhalant vaccines
According to Wired, the company Aktiv-Dry has produced an inhalable measles vaccine that has been shown to work in monkeys: Bundled in blister packs and inhaled, the dry-powder measles vaccine targets the respiratory system—just like the virus. It’s transportable and stable for six months without refrige­ration.

6) Listerine-strip-style vaccines
The same Wired story also mentions a project in the works by Aridis Pharmaceuticals, which it turns out involved a collaboration with Johns Hopkins University researchers. It’s a dissolving mouth strip designed for rotavirus vaccination in babies and isn’t yet on the market.
“Like the Listerine strip, theirs has a thin, quick-dissolving film,” Gina Kolata described in a 2008 New York Times story, “But they also have a shell that protects the virus as it travels through the stomach’s acid to the small intestine.”

7) Mosquito-mouthparts-like syringe vaccines
Sometimes you get a mosquito bite and don’t even feel it. Researchers are trying to take that concept and apply it to vaccines. According to a story from Popular Science, researchers at Kansai University in Japan are working on a multipart syringe that includes vibrating jagged parts that likely make it so that the needles have to produce far less pressure to enter the skin (videos here). This, they guess, will also lead to less pain.