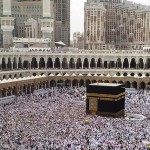 With 39 deaths globally from a virus outbreak hitting hardest in Saudi Arabia, the government has begun relaying health advisories that children, the elderly, pregnant women and the terminally ill should stay home from this year’s Muslim pilgrimages to the holy city of Mecca.

The pilgrimage for the Muslim hajj holiday, which this year falls in mid-October, annually draws about 3 million faithful from around the world to Mecca. Millions more come on pilgrimage before the hajj, with the pilgrimage season this year peaking in summer and autumn.

The pilgrimage historically has been a global focal point for contagious diseases. A 2012 study of French pilgrims said more than 80% returned with respiratory symptoms, and 40% with flu-like symptoms.

Pilgrimages to Mecca are a central tenet of the Muslim faith. Islam requires all Muslims with the means to make the pilgrimage at least once in their lives.

Saudi Arabia said last week it was cutting the number of pilgrims this year – by 20% for foreigners, and 50% for Saudis – attributing the reduction to construction work in Mecca which has restricted crowd capacity.

But diplomats have suggested that the recent viral outbreak may be another reason for the cuts, announced in Arab news media just as the annual pilgrimage season moves into high gear. Some note that Saudi Arabia issued the same recommendation for the same four groups ahead of the 2009 hajj, amid concerns about the spread that year of the H1N1 avian flu virus.

Since September 2012, the World Health Organization has reported 70 confirmed cases of the new virus, which medical authorities have dubbed the Middle East respiratory-symptom coronavirus, or MERS. The virus is from the same family as the SARS virus which killed more than 700 people a decade ago.

The majority of MERS cases and deaths have occurred in Saudi Arabia in the past three months. Several of the victims had contact with goats and camels, though health authorities have yet to confirm the virus’s original animal source.

Saudi websites for pilgrimage visas have begun relaying medical advisories stating that those considered particularly susceptible – pregnant women, those with a pre-existing mortal illness, children, and the elderly – should not attend the hajj or umrah pilgrimages this year.