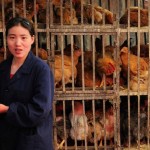 The avian H7N9 influenza virus that emerged earlier this year in China is poorly adapted for sustained transmission between humans, suggesting that the current form of the virus is unlikely to cause a pandemic, according to a new study led by Ian A. Wilson, Ph.D., and James C. Paulson, Ph.D., of The Scripps Research Institute (TSRI). The study, published y in Science, was supported by the National Institute of Allergy and Infectious Diseases (NIAID), part of the National Institutes of Health, and other organizations.

As of November 6, 139 confirmed human cases of avian H7N9 influenza, including 45 deaths, have been reported by the World Health Organization. Most of these cases have been linked to exposure to infected poultry, but in some cases, limited human-to-human transmission may have occurred.

In this study, the TSRI scientists examined the three-dimensional structures of the hemagglutinin (HA) protein on the surface of the virus and its interaction with the human influenza receptor—the molecule on the surface of human cells that HA binds to before entering the cell and causing infection. Previous research had shown that compared to influenza viruses that are adapted to spread easily among birds, viruses adapted to humans generally have different amino acids (protein components) at the HA site that recognize and bind to the human receptor.

Recent studies have shown that certain H7N9 viruses had acquired mutations that might make them more adapted to humans. However, using X-ray crystallography to study the HA and receptor structures with unprecedented accuracy, the TSRI researchers demonstrated that the HA in avian H7N9 influenza most closely resembles that of viruses that spread easily among birds, yet only weakly attaches to human influenza receptors.

Although it is not impossible that the H7N9 virus could eventually become transmissible from person to person, it would need to undergo multiple other mutations to do so, the study authors write.