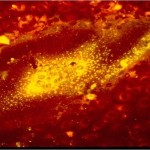 Sustained high vaccination coverage is key to preventing deaths from measles. Despite the availability of a vaccine, measles remains an important killer of children worldwide,

particularly in less-developed regions where vaccination coverage is limited. A team of researchers, led by scientists at the Johns Hopkins Bloomberg School of Public Health and the University of Colorado,developed and successfully tested a dry powder,live-attenuated measles vaccine that can be inhaled. The novel vaccine was studied in rhesus macaques.

Results of the study are published in the January 31 edition of the journal PNAS.

The current measles vaccine requires two injections to provide full immunity — one given at 9 to 12 months of age and another later in childhood. Special training for needle and syringe injections is needed to administer the vaccine, which requires refrigeration and is shipped as a powder that must be reconstituted and kept on ice in the field clinic. Such injections increase the risk of exposure to blood borne diseases.

According to the study, the new dry powder measles vaccine provided the macaques complete protection from measles with a single vaccine dose. The vaccine was delivered by aerosol using either one of two dry powder inhalers, the PuffHaler and the BD Solovent. No adverse effects were observed.

“An effective dry powder vaccine would be tremendously helpful in less developed regions where resources are limited,” said Diane E. Griffin, MD, PhD, senior author of the study and chair of the W.Harry Feinstone Department of Molecular Microbiology and Immunology at the Bloomberg School of Public Health. “This vaccine can be shipped as powder and does not require reconstitution or special training to administer, which could greatly increase the ease and safety of measles vaccination worldwide.”

Before a vaccine was developed in 1963, there were 130 million cases of measles each year resulting in more than 7 million deaths annually. Measles deaths were estimated to be 164,000 in 2008. Human trials for the dry powder measles vaccine are in development in India.

“The tests of inhalable dry powder vaccine at Johns Hopkins provide confidence that it can safely be tested in human volunteers after regulatory permission is given by Indian authorities,” said Robert Sievers,professor at the CU Boulder and a Fellow of the Cooperative Institute of Research in Environmental Sciences. He is also CEO of Aktiv-Dry LLC and co-inventor of the PuffHaler and the new vaccine microparticles.

The research was supported by grants from the Bill & Melinda Gates Foundation and the Foundation for National Institutes of Health. Additional support was provided by the Marjorie Gilbert Scholarship Fund.

The above story is reprinted (with editorial adaptations by ScienceDaily staff) from materials provided by Johns Hopkins University Bloomberg School of Public Health.