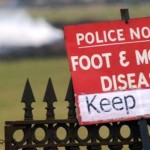 British scientists have developed a “holy grail” vaccine for foot-and-mouth disease that is safer and more resilient than current vaccines, according to an article published in the journal PLOS Pathogens on Wednesday.

At the moment, animals are given a small dose of live infectious virus to stimulate the body’s immune system into producing antibodies that recognise and destroy the pathogen whenever it appears in the bloodstream.

Now scientists believe they can produce an entirely synthetic vaccine thanks to atomic analysis of the virus using Britain’s particle accelerator, the Diamond Light Source, near Oxford in southern England.

Using the data, a team of scientists from Oxford and Reading Universities and the Pirbright Institute were able to reconstruct the outside structure of the virus, which triggers the production of antibodies. The hollow shell contains no pathogenic RNA — the genetic material viruses use to replicate themselves — so there is no chance of accidental infection during vaccination.

The scientists were also able to tweak the structure to make it stronger. Preclinical trials found it to be stable at temperatures up to 56 degrees Celsius for at least two hours.

“What we have achieved here is close to the holy grail of foot-and-mouth vaccines,” said Dave Stuart, Life Sciences Director at Diamond, and MRC Professor of Structural Biology at the University of Oxford. “Unlike traditional vaccines, there is no chance that the empty-shell vaccine could revert to an infectious form.”

The technology should also be transferable to other viruses from the same family, such as poliovirus and hand, foot and mouth disease, a human virus endemic in Southeast Asia, he added.

Foot-and-mouth disease is endemic in central Africa, parts of the Middle East and Asia.