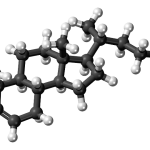 A team of researchers at the University of New Mexico (UNM) and the National Institutes of Health (NIH) have developed a vaccine to treat high cholesterol. The vaccine, which targets a molecule called PCSK9, a protein involved in cholesterol metabolism, is a cost-effective alternative to current expensive cholesterol drugs and could lead to a widely applicable vaccine-based approach for controlling high cholesterol and cardiovascular disease.

The study demonstrated that the vaccine dramatically lowered cholesterol levels in animals. The study, “A Cholesterol-Lowering VLP Vaccine that Targets PCSK9,” was recently published in the journal Vaccine by Dr. Bryce Chackerian, professor in the Department of Molecular Genetics & Microbiology at UNM, Erin Crossey, an MD/Ph.D. student at UNM, and Drs. Alan Remaley, John Schiller and Marcelo Amar at NIH.

Genetic mutations that increase PCSK9 activity are linked to increased levels of low-density lipoprotein cholesterol (LDL-C—the “bad” cholesterol), which in turn is associated with an increased risk of plaque build-up in the arteries leading to coronary heart disease (CHD) and stroke. More than 73 million adults in the United States (approximately 32 percent of the population) have elevated LDL-C levels, or high cholesterol.

Although lifestyle changes and medication (such as statins) can lower LDL-C, more than 60 percent of at-risk patients on lipid lowering therapy still go on to have a cardiovascular event.

Statins have side effects, including increased concentrations of liver enzymes, muscle pain, cognitive loss, increased risk of diabetes, and adverse drug interactions. As an alternative to statins, drug companies have developed monoclonal antibody-based drugs that target PCSK9, such as Alirocumab and Evolocumab that were recently approved by the FDA to treat high cholesterol.

While these drugs have been shown to dramatically reduce LDL-C levels (by up to 60 percent) and cardiovascular events, they are extremely expensive, costing over $10,000 per year. This will likely limit the use of this class of drugs for those patients who cannot be effectively managed with statins or some of the other currently used cholesterol-lowering drugs. Additionally, monoclonal antibody therapies must be administered repeatedly for therapeutic effect.

The vaccine uses a VLP (virus-like particle) technology developed by Dr. Chackerian and his UNM co-inventors as an immunogenic carrier of an antigenic PCSK9 peptide. VLP’s are viruses that have had their DNA removed so that they retain their external structure for antigen display but are unable to replicate; they can induce an immune response without causing infection. VLP based vaccines are effective and safe and can be developed rapidly at low cost.

“We believe that this vaccine could lead to a widely applicable approach for controlling hypercholesteremia and cardiovascular disease,” Chackerian said.

The patent pending vaccine is good news not only for patients but UNM’s technology-transfer organization, STC.UNM (STC) as well. “This technology is a strong candidate for successful commercialization and could be an entirely new and effective way of treating diseases that are a result of untreated high cholesterol,” added STC CEO Lisa Kuuttila.