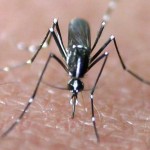 A vaccine against chikungunya that is based on a measles vaccine virus has shown encouraging results in its first human trial.

There is currently no approved vaccine against chikungunya. The candidate vaccine reported in The Lancet Infectious Diseases is only the third to go into clinical trials.

The vaccine, developed by Themis Bioscience, an Austrian biotechnology company, utilises a live but weakened measles vaccine virus, the Schwarz strain. The genetic material of this virus has been modified to incorporate five structural genes taken from a chikungunya virus.

Use of the Schwarz strain was “a good technique,” observed Penny Rudd and Suresh Mahalingam of Giffith University, Australia, in a commentary published in the same journal. “The measles virus vaccine is one of the safest on the market and has been mass-produced at low cost in many countries since the early 1960s,” they noted.

After the vaccine’s efficacy was demonstrated in laboratory mice, Phase 1 clinical trials were carried out at the Medical University of Vienna in Austria. The tests were carried out on 42 healthy men and women. The vaccine was administered at three different doses (low, medium and high), with a second booster immunisation given either 28 or 90 days after the first injection.

All doses of the candidate vaccine were effective. However only 44 per cent of participants in the low-dose group developed antibodies against chikungunya after the first injection, compared to 92 per cent and 90 per cent in the medium- and high-dose groups. But after the subsequent booster injection, all participants produced such antibodies, according to the paper by Katrin Ramsauer and colleagues.

The trial also showed that pre-existing measles immunity did not block the vaccine and prevent recipients from generating antibodies against chikungunya.

“We are currently working on the preparation of Phase 2 trials” scheduled to start later this year, said Erich Tauber, Chief Executive Officer of Themis Bioscience, in an email.

The first chikungunya vaccine to go into human trials was developed at the United States Army Medical Research Institute of Infectious Diseases (USAMRIID) and utilised a live, weakened form of the chikungunya virus itself. A report on its Phase 2 trials was published in 2000. Despite this, unfortunately “the first vaccine fell victim to a lack of funding and marketable interest,” noted Dr. Rudd and Dr. Mahalingam.

Last year, scientists at the National Institute of Allergy and Infectious Diseases in the U.S published results from the Phase 1 trial of their vaccine. The vaccine used virus-like particles generated from three surface proteins of the chikungunya virus.

Consequently, along with the vaccine from Themis Bioscience, there are at present two candidate vaccines against chikungunya that can go into Phase 2 trials.