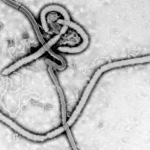 Ebola researchers say they are a ‘tad disappointed’ at Ebola vaccine trials as scientists in Guinea warn the virus has mutated.

Independent experts said that while the vaccine has been deemed safe, it did not perform as well as they would have liked.

A total of 60 healthy volunteers were inoculated at Oxford University’s Jenner Institute between September 17 and November 18 last year.

Two volunteers experienced a moderate fever which passed within a day.

But scientists in Guinea are warning that the disease could actually be becoming more more contagious, according to the BBC.

Human geneticist Anavaj Sakuntabhai said: ‘We know the virus is changing quite a lot. That’s important for diagnosing [new cases] and for treatment. We need to know how the virus [is changing] to keep up with our enemy.

‘We’ve now seen several cases that don’t have any symptoms at all, asymptomatic cases.

‘These people may be the people who can spread the virus better, but we still don’t know that yet. A virus can change itself to less deadly, but more contagious and that’s something we are afraid of.’

Speaking about the vaccine molecular virologist Professor Jonathan Ball, from the University of Nottingham, said: ‘The data have confirmed that the GSK vaccine is well tolerated, with only a small number of people experiencing very minor side effects, which is good news.

‘The vaccine was also capable of provoking an immune response, although the overall potency of this response was a tad disappointing.

‘The magnitude of the immune responses observed in the vaccine recipients were less than those observed in monkeys that were protected from experimental Ebola virus infection, but we don’t fully understand what degree of immunity humans require in order to protect them from infection.

‘That’s why clinical trials are important.’

Trial leader Professor Adrian Hill, from the Jenner Institute, said: ‘The results are very encouraging in terms of the safety profile of the vaccine.

‘That is the main outcome from this trial. We have seen an immune response in the great majority of people receiving the vaccine.

‘It is possible to be optimistic about the immune responses we’ve seen; it’s also hard to be really confident the levels would be protective.

‘Larger trials in West Africa will be able to tell us more.

Several trials of the GSK/NIH vaccine have been fast-tracked in the US, UK, Mali and Switzerland in response to the Ebola outbreak.

Since the start of the outbreak in March last year, Ebola has claimed more than 8,600 lives in Guinea, Liberia and Sierra Leone, Nigeria, Mali and the US.

More than 21,797 cases of the infection have been reported.