Ebola may have been lurking in West Africa for years, study says 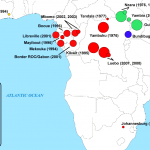 The deadly Ebola virus that killed over 600 people in West Africa may have been lurking in the areas for years and has sickened people who were not aware that they are infected, researchers say.

A study of blood samples from people treated for a serious, viral-like infection in Sierra Leone, Guinea, and Liberia in the past years suggests some of them could have been infected with Ebola.

Randal Schoepp, of the U.S. Army Medical Research Institute of Infectious Diseases team, although the test that they did was not completely reliable, it is lead worth pursuing.

He said the virus may have been circulating for a long time, but just undetected and had not gotten into an outbreak.

Researchers said more testing will be needed to determine if their theory is what really happening in West Africa.

The World Health Organization said Ebola has so far killed 613 people in Guinea, Sierra Leone and Liberia. Almost 900 individuals were diagnosed to be infected, making the mortality rate of over 60 percent.