Emerging tick-borne pathogen may cause inflammation in immunosuppressed patients 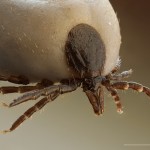 The emerging tick-borne pathogen Candidatus Neoehrlichia mikurensis may be the cause of a systemic inflammatory syndrome among people with hematologic malignancies or autoimmune diseases, according to researchers from Sahlgrenska University Hospital in Gothenburg, Sweden.

The infection may be mistaken for recurrence of the underlying disease or an unrelated arteriosclerotic vascular event, which was common among the patients, according to the report in Clinical Infectious Diseases.

The researchers compiled data on 11 patients in Europe who were diagnosed with Candidatus Neoehrlichia mikurensis infection. The median age of the patients was 67 years and eight were men. Ten had recently or were currently undergoing an immune suppressive treatment. Fewer than half reported tick exposure.

All of the patients had systemic inflammation. All had fever with chills and nightly sweats. The other most common symptom was localized joint and/or muscle pain in eight of the patients. Six of the patients also developed vascular or thromboembolic event, including deep vein thrombosis, transitory ischemic attacks, pulmonary embolism and arterial aneurysms.

Elevation of the acute phase reactant C-reactive protein was found in all patients. Other common findings were leukocytosis with neutrophilia and anemia.

Candidatus Neoehrlichia mikurensis was diagnosed in all cases by pan-bacterial PCR gene analysis on blood samples, although it was also found in plasma, blood culture flask contents and bone marrow samples of some patients.

The median time from symptom onset to diagnosis was 60 days. All patients had a complete response to doxycycline treatment for 3 to 6 weeks. The median time to symptom resolution was 5 days.

“We hope to raise the awareness of this newly discovered microbe that may give rise to an infectious disease in elderly persons with autoimmune conditions and hematological malignancies,” the researchers wrote. “Physicians in the fields of rheumatology, hematology, oncology and infectious diseases should be aware of this new infectious agent and their attention drawn to patients with suspected recurrence of the underlying autoimmune or hematologic disease where the clinical picture is atypical.”