HIV: Why is the virus so ‘successful’? 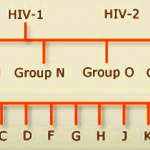 HIV has repeatedly made the jump from animals to humans. But only once did it spread around the world. Jonathan Ball, professor of virology at the University of Nottingham, asks why.

In Cameroon, about 100 years ago, an ill-fated human being, possibly a wildlife hunter or maybe a butcher, unwittingly became infected with a chimpanzee virus while handling a prized primate catch.

At least that’s the consensus view on how the human immunodeficiency virus type 1 (HIV-1) pandemic started. But it wasn’t an isolated event.
Scientists soon discovered that many different strains of HIV-1 existed.

By studying their genetic relatedness, researchers were able to place all the known viral strains into one of four very clear groups, labelled Group M, N O and P, a tell-tale sign that these viruses successfully made the jump from their natural primate host into humans on at least four separate occasions.

M for the win

Groups M and N spilled over from chimpanzees and group P most likely from gorillas. The exact ape source of the Group O viruses remains a mystery to this day.

Each group of HIV-1 is more genetically related to their animal virus cousins than they are to one another.

And these groups of virus have experienced differing degrees of success in their new-found host, as Greg Towers, professor of virology at University College London explained: “Group N and P viruses are very rare, only a handful of people, all living in Africa, have been shown to be infected with group N and P viruses.

“Group O viruses have fared better but are still mainly restricted to Central African countries and represent less than 1% of the world’s HIV-1 infections. It’s the M viruses that have flourished.

“The O and the M viruses have been in the population for about the same length of time. So the key question is: what is different about group M?Why has M infected 60 million people and O only around 100,000 people?”

Things like travel and risky behaviours – sexual promiscuity and the re-use of hypodermic needles – would have played a part. But the numbers infected are hugely different; other factors must be at play.

The recipe for success

The first clue to what these factors are came when scientists tried to grow HIV-1 in the laboratory in different animal cells.

Some cells could be infected very easily while others were far more resistant. Similarly, some virus genes were shown to be essential for infectivity in some cell types, but totally superfluous in others.

Studies on one of HIV-1’s proteins, called Vif, showed that it was essential for the virus to replicate in some cells, but was totally dispensable in many others.

Through a series of intricate experiments, researchers were able to show that a human protein, now known as APOBEC3G, had inbuilt antiviral activity and could block infection, but HIV used its Vif protein to quash the effect.

Soon, other so-called restriction factors were discovered and a complex picture of virus and host conflict emerged.

While work was progressing on isolating and understanding restriction factors, other researchers were showing that a variety of monkey and apes harboured viruses belonging to the same family as HIV – the retrovirus family.

As more and more data emerged, it became clear that retroviruses had evolved very specific approaches to subvert their natural hosts’ restriction factors but, according to Prof Towers, these evasive tactics usually fail when a retrovirus chances its luck in a new host: “Cells are really good at defending themselves and they have these incredibly complex mechanisms and all viruses have to evade or antagonise these in order to infect a species.

“But the virus evasion mechanisms have evolved in a host-specific way and that’s why it’s so difficult for the virus to jump from one species to another.”

Whilst HIV-1 successfully made the jump into humans on at least four occasions, it was the ability of those founding viruses to evade or interfere with the collection of human restriction factors that helped determine the final outcome.

And perhaps the most important evasive step is dodging the effects of a host protein called tetherin – a protein that tethers newly made viruses to stop their release from the cell. This protein also alerts the cell’s other internal defence systems that a virus attack is underway.

Chimpanzee and gorilla viruses use a protein called Nef to sabotage the action of great ape tetherins, but this viral protein is unable to interfere with the human version of tetherin.

For the group M chimpanzee virus to be able to successfully make the jump into humans it started to use a different protein altogether to antagonise tetherin, and the group M viruses do this far more efficiently than any of the other three groups.

It’s not clear if the Group M ancestor had these human escape mechanisms built-in, or whether it adapted to humans once it got in there.
Either way, Group M was set to dominate the HIV-1 world.