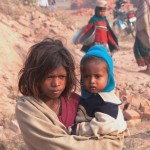 India’s last case of the wild polio virus was detected in January 2011 in a two-year-old girl in the state of West Bengal. Three years without any new cases means a country can be certified as polio-free.

Afghanistan, Pakistan and Nigeria are the only countries in the world left where the virus remains endemic, largely due to violent conflicts, weak health systems and poor sanitation.

“This ceremony … marks one of the biggest public health achievements,” Poonam Khetrapal Singh, the WHO’s Southeast Asia director, told diplomats and health officials at the event.

“It is a day that all countries fought hard for, and a day when all stakeholders come together to celebrate the victory of mankind over a dreaded disease that, for centuries, has killed and disabled legions.”

Until the 1950s, polio crippled thousands every year in rich countries. It attacks the nervous system and can cause irreversible paralysis within hours of infection.

The highly contagious virus often spreads in areas with poor sanitation and children under five are the most vulnerable.

In 1988, the Global Polio Eradication Initiative – led by governments and supported by organisations such as WHO, Rotary International and the U.N. Children’s Fund – was launched to ensure comprehensive, nationwide vaccination in endemic nations.

More than 350,000 children across 125 countries were being paralysed or killed by polio every year at that time. That figure has since reduced by 99.9 percent and in 2013, just 406 cases of polio were reported.

India – where more than 50,000 children were afflicted with the virus every year – was considered one of the toughest places in the world to eradicate polio. Many families in poor, high-risk northern states such as Bihar and Uttar Pradesh migrate for work, while others live in remote areas.

Millions of health workers were involved in India’s mammoth drive to immunise children by giving them polio drops.

They targeted migrant families at bus stations, on trains and at festivals. Some used motorcycles or trekked by foot to reach villages.

As a result, over 170 million children are now immunised every year, with millions more targeted in house-to-house visits in a drive which has cost the government $3 billion since 1995.

In Pakistan – the only country where polio cases are increasing – gunmen frequently attack polio workers, accusing them of being Western spies and part of a plot to sterilise Muslims. Earlier this month, militants killed 12 members of the security escort for a polio vaccination, detonating a roadside bomb before opening fire on their convoy.

In neighbouring Afghanistan, a three-year-old girl was found in February to have contracted the first case of polio in the country’s capital Kabul since 2001.