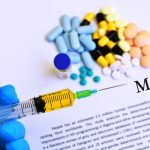 In regions of the world where malaria is endemic, pregnant women who contract the infection face severe health risks as well as complications in their pregnancies.

Blood cells infected with malaria-causing Plasmodium falciparum parasites tend to accumulate in the placenta, negating the childhood immunity that some people develop in endemic regions, which would typically mitigate the effects of the disease.

The study team behind a phase 1 trial recently published in The Lancet Infectious Diseases has demonstrated that the PRIMVAC placental malaria vaccine candidate is safe, immunogenic, and induced functional antibodies in volunteers.

The study marks the first in-human trial of the vaccine candidate, but did not evaluate the placental vaccine in pregnant women. The study design involved a randomized, double-blind trial in 2 staggered phases, which took place between April 19, 2016, and July 13, 2017.

The phase 1A trial was conducted in France among 18-35-year-old women who were malaria naïve. Volunteers in phase 1A were randomly assigned to 2 groups, receiving PRIMVAC adjuvanted with either Alhydrogel or glucopyranosyl lipid adjuvant in stable emulsion (GLA-SE).

The phase 2B trial was conducted at the clinical site of a research center in Burkina Faso among women who had been naturally exposed to P falciparum. Volunteers in phase 1B were randomly assigned between 3 groups, receiving PRIMVAC adjuvanted with either Alhydrogel, GLA-SE, or placebo.

The primary endpoint of the trial was the proportion of participants with a grade 3 or higher adverse reaction to vaccination through 35 days.

A total of 68 women were enrolled out of the 101 assessed for eligibility. A participant discovered she was pregnant shortly after randomization, and did not receive any injections.

Among the 67 remaining volunteers, 63 received all 3 injections. After 2 injections, 1 woman withdrew due to pregnancy. The other 3 participants who did not receive all 3 injections had withdrawn consent before the 2nd or 3rd vaccination.

Antibody titers increased with each successive dose and seroconversion was observed in all women who received the vaccination. PRIMVAC antibody titers peaked at a geometric mean of 11843.0 on day 63, 1 week after vaccination 3 in the series.

A year after the last vaccination, 20 (71%) of 28 women who were vaccinated with PRIMVAC adjuvanted with Alhydrogel.

Comparatively, a year after the last vaccination 26 (93%) of 28 women who were vaccinated with PRIMVAC adjuvanted with GLA-SE still had anti-PRIMVAC antibodies.

“Future studies should seek to increase the amount of cross-reactive and cross-inhibitory antibodies. Follow-up of the Burkinabe women vaccinated with PRIMVAC could provide some indication as to whether or not the immune response associated with PRIMVAC vaccination could help these women in accelerating clinical protection against placental malaria,” study authors concluded.