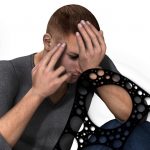 Thousands of people are living with memory loss and other long-term neurological problems as a result of West Nile virus, which is spread by mosquitoes such as the one shown here preparing to feed on a human host. Now researchers at Washington University School of Medicine in St. Louis have shown that these problems may be due to the patients’ own immune systems destroying parts of their neurons, which suggests that intervening in the immune response may help prevent brain damage or help patients recover.

Every year as mosquito season arrives, so does West Nile virus, causing fever in thousands of people nationwide and life-threatening brain infections in an unlucky few. About half the people who survive that infection — West Nile encephalitis — are left with permanent neurological deficits such as memory loss.

New research shows that these long-term neurological problems may be due to the patient’s own immune system destroying parts of their neurons, which suggests that intervening in the immune response may help prevent brain damage or help patients recover. The study is published June 22 in Nature.

Since 1999, when West Nile arrived in the Western Hemisphere via an infected flamingo in the Bronx Zoo, the virus has spread throughout the Americas, infecting millions of people. Ten thousand West Nile survivors are living with long-term neurological problems such as fatigue, weakness, difficulty walking and memory loss, and the number goes up by about a thousand every year following mosquito season. There is no vaccine or specific treatment for West Nile infection.

“When I talk with other doctors about West Nile patients with these persistent neurological deficits, many say, ‘The virus in their brains must have killed neurons, and there’s nothing we can do about it,'” said Robyn Klein, MD, PhD, a professor of medicine and the study’s senior author. “My thinking has been, if we can determine what triggers this brain damage, maybe we can prevent this from happening or stop it afterwards.'”

Klein, postdoctoral researcher Michael Vasek, PhD, and colleagues developed a mouse model of West Nile encephalitis by injecting a weakened strain of the virus directly on top of the mouse hippocampus, a region of the brain important for memory. A month after the mice had recovered from the infection, the researchers tested the animals’ ability to navigate a maze.

Much like West Nile survivors who cannot navigate their neighborhood, the infected mice could not remember how to navigate the maze. But contrary to conventional wisdom, their hippocampal neurons hadn’t been killed by the virus.

Instead, the researchers found that microglial cells, a kind of immune cell that lives in the brain, were clustered around the neurons at the site of infection and were highly activated — “on fire,” as Klein put it.

Moreover, levels of an immune protein called complement were high in the brains of mice with memory loss.

Neurons make connections to each other at junctions called synapses, allowing information to be passed from cell to cell. During normal brain development, many more synapses are formed than needed and only those that are strengthened should persist. Complement tags the weak synapses to be removed, and activated microglia destroy them.

In the mice with memory loss, viral infection seems to have sent this system into overdrive, leading to the destruction of needed synapses. Synapses must be formed or strengthened for learning and memory to occur. While the neurons near the activated microglia were still alive, they were lacking synapses. The more synapses that were destroyed, the worse the mouse’s memory problems.

“There’s never been any model of cognitive dysfunction due to brain infection that shows that eliminating synapses without loss of neurons could cause these symptoms,” said Klein, who is also a professor of pathology and immunology, and of neurosciences. “It’s really a paradigm-shifting idea that a viral infection can do this. It also makes us wonder whether these mechanisms are involved in other diseases associated with memory loss.”

Healthy people create new synapses throughout life as they learn new things. West Nile survivors, however, may be unable to grow new synapses to replace the ones lost during their bouts of encephalitis.

“The microglia remain activated long after the virus is cleared, and this may be preventing the synapses from recovering,” Klein said. “But that gives us hope that we can develop interventions directed at the immune response. We think we can treat this. And that’s what we’re trying to do.”