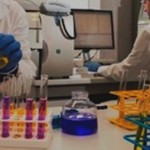 Research out of the University of Michigan and Purdue University has found an important aspect of how both the dengue virus and West Nile virus replicate in their host cells. The scientists believe this will lead to a better understanding of how the virus infects humans, and ultimately to the development of a vaccine.

Janet Smith and her team published a study in the journal Science, which uncovered the structure of a protein that allows the virus to replicate and manipulate the immune system. “Seeing the design of this key protein provides a target for a potential vaccine or even a therapeutic drug,” Smith said in a press release.

The protein is called NS1 and is produced inside cells that are infected by the virus, where it assists in viral replication. NS1 is also released into the bloodstream during infection, where it helps to disguise the infection from the immune system. This particular protein also affects hemorrhage, which occurs in severe dengue virus infection.

The protein itself is somewhat old news, but researchers simply haven’t been able to study it in complete detail. Smith was able to create larger images of the protein using X-ray crystallography. “Isolating the protein in order to study it has been a challenge for researchers,” Smith said. “Once we discovered how to do that, it crystallized beautifully.”

The researchers found that NS1 has a 3D structure with two distinct sides. One side faces deals with replication, and the other side deals with the immune system and faces outside the cell. Smith notes that these two faces of NS1 “define the regions responsible for its two major functions.”

NS1 is a target for treatment of the infection, due to its unique role in replication and also its release into the bloodstream. Richard Kuhn, professor and department head of biological sciences and the Gerald and Edna Mann director of the Bindley Bioscience Center at Purdue University, said in the press release that, “Having the structure of NS1 is a huge advance in understanding, and using, the protein to our advantage.” He continued, “Understanding how the protein is designed provides an easier pathway to understanding its roles in the virus life cycle. We now know which portions of the protein to target in drug development to shut it down and stop the progression of infection.”

The development of a solid vaccine has been stalled due to one particular problem: Dengue can be caused by one of four related viruses that are transmitted by mosquitoes; victims are typically infected by one type that develops into a mild flu-like disease. However, if bitten by a mosquito that carries another of the four types, second exposure can lead to severe dengue and death. “We don’t want to prime people for severe dengue disease by delivering their first exposure to the virus in the form of a vaccine,” Smith said.

Dengue fever, also known as breakbone fever, is a tropical disease that involves fever, muscle and joint pain, and headache. It’s transmitted via moquitos in the genus Aedes, particularly A. aegypti. More and more people have contracted dengue fever per year since the 1960s. It infects about 50 to 100 million people every year. At the moment, only supportive treatment is available.

The researchers hope their improved understanding of NS1 structure will assist in new ways to target these viruses. “We’re now collaborating with the Purdue virologists to understand exactly how the two faces of NS1 help the virus survive and thrive in patients,” Smith said. “These studies are the next steps toward a vaccine or an antiviral drug.”