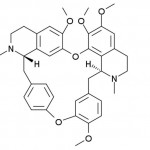 New research that focuses on the mechanism by which Ebola virus infects a cell and the discovery of a promising drug therapy candidate is being published February 27, 2015, in the journal Science. Dr. Robert Davey, scientist and Ewing Halsell Scholar in the Department of Immunology and Virology at Texas Biomedical Research Institute announced that a small molecule called Tetrandrine derived from an Asian herb has shown to be a potent small molecule inhibiting infection of human white blood cells in vitro or petri dish experiments and prevented Ebola virus disease in mice.

The latest outbreak of Ebola virus disease has caused the death of more than 9,400 people worldwide and created an international crisis that has shown few signs of stopping, continuing to infect thousands in West Africa. Ebola virus causes hemorrhagic fever in humans and currently has no approved therapy or vaccine. Scientists at Texas Biomed have been working in the Institute’s Biosafety Level 4 containment laboratory for more than 10 years to find a vaccine, therapies and detection methods for the virus.

Davey and his team have been working for more than five years on identifying and finding therapy targets for Ebola virus disease. Davey’s research has focused on stopping the virus before it has a chance to enter or interact with cellular factors, as that is a critical first step to combatting infection.

Ebola virus begins its entry into a cell by first binding to several types of cell surface proteins. Then the virus is taken into the cell and follows an endosomal route, or membrane-bound route that transports the virus to various cell compartments.

From previous studies, Davey said that during this endosomal process, he knew that calcium signaling in cells, which allow cells to transmit electrical charges to one another, controls many of the processes in the cell and was important for Ebola virus infection.

“We were not able, however, to pinpoint the mechanisms involved in this process,” Davey explained. “With this research, we discovered that two pore channels (TPCs) are the key calcium sensor involved in Ebola virus infection. These TPCs essentially need to be turned on in order for the virus to function properly.”

Two pore channels are unusual calcium channels found in endosomes that control the way endosomes move through cells and the environment of the cells. Davey compared TPCs to traffic cops and air conditioners, helping direct the endosomes and any virus it might be carrying through the cell and making the endosomes and its passengers more comfortable along the way.

Davey and his team were able to show the critical role of two pore channels in Ebola virus infection, which has not previously been shown in any other virus.

In addition to identifying this critical mechanism to infection, Davey’s team also showed that drugs targeting this interaction show some efficacy as potential treatments against Ebola virus disease.

In the study, Davey’s team determined that existing drugs currently used to treat high blood pressure have an ability to turn this key calcium sensor on and off. Working with a group in Munich, Germany and Southwest Research Institute, the team tested several small molecules to see which was most effective at turning the sensors off thus prohibiting Ebola virus from moving any further through the cell.

The team found Tetrandrine protected mice from disease without obvious side effects and was the best candidate for further animal testing, because it was the most potent compound tested, gave little evidence of cytotoxicity and required a smaller dose to be effective and tolerated.

“When we tested in mice, the drugs stopped virus replication and saved most of them from disease,” Davey said.
Essentially, this drug shows an ability to stop the virus before it has a chance interact with cellular factors, thus stopping the virus from continuing its infection process.

“We are very excited about the progress made in this study and the momentum it provides as scientists across the world vigorously search for effective vaccines and treatments against Ebola virus,” Davey said. “We are cautiously optimistic. The next step in the process is to test both safety and effectiveness of the interaction of the drug with Ebola virus in non-human primates.”