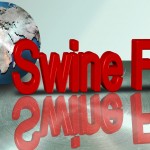 Since December 2014, swine flu has claimed the lives of over 1,300 people in India, making it the worst outbreak of the virus in the country since 2009. But according to a new study by researchers from the Massachusetts Institute of Technology, the virus that has caused the current epidemic is not the same as the one responsible for the 2009 outbreak; it has acquired mutations that make it more virulent.

The 2009 swine flu outbreak – caused by the H1N1 virus – originated in Mexico, rapidly spreading from country to country. It is estimated that 43-89 million people around the globe became infected with the virus, and between 8,870 and 18,300 deaths were reported as a result. Around 2,700 of these deaths occurred in India.

While the virus has been circulating worldwide ever since, late 2014 saw a major resurgence in India. Since mid-December, it is estimated that the H1N1 virus has infected more than 25,000 people in the country.

The researchers of this latest study – including Prof. Ram Sasisekharan of the Koch Institute for Integrative Cancer Research at the Massachusetts Institute of Technology (MIT) – say that in India, reports have surfaced that the current swine flu outbreak has been caused by a similar virus to the one that caused the 2009 pandemic. However, their research finds this may not be the case.

Prof. Sasisekharan and his colleague Kannan Tharakaraman, also of the Koch Institute at MIT, compared the viral proteins of the H1N1 strain responsible for the 2009 outbreak with those of the strain that is currently circulating in India.

The results of the analysis, which are published in the journal Cell Host & Microbe, revealed significant differences between the two strains.

“Examination of the Indian H1N1 flu viruses that circulated in 2014 shows amino acid mutations that make them distinct (in terms of receptor binding, virulence and antigenic drift) from the A/California/07/2009 virus (2009 virus),” explains Prof. Sasisekharan.

Put simply, the team’s findings indicate that the virus has evolved in a way that allows it to spread more easily.

The researchers also highlight the lack of scientific information regarding the 2014 swine flu outbreak in India, which they believe has led to conflicting reports about the virus. They point out, for example, that since 2012, a relatively low number of viral sequences from India have been submitted for public analysis.

Based on their findings, the authors call for better assessment and monitoring of the swine flu outbreak in India going forward:
“The influenza outbreak in India should be further examined to determine the virulence and potential threat of the virus. Improved surveillance and monitoring of the influenza outbreak will significantly enhance the options of how best we can manage outreach to both treat as well as prevent spread of the virus.”