When it comes to vaccination, bad news is contagious 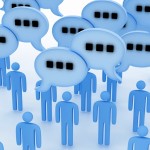 In recent years, the controversy about vaccine safety has exploded online. Fueled by pseudoscience, conspiracy theories, and ignorance, a surprisingly large number of people today refuse to vaccinate themselves or their children. According to a 2011 poll, nearly a quarter of Americans have changed their opinion on vaccination in the last five years, and for the vast majority of these people, that change has been in a negative direction.

There’s no better tool than social media to spread information—and misinformation—about controversial topics quickly and efficiently, and there has been speculation that these outlets have played a role in heightening concerns about vaccination. But how do opinions about health-related behaviors spread over social media?

A group of researchers from Penn State used Twitter to answer this question, and their findings were published in EPJ Data Science last week.

During the H1N1 epidemic in 2009, the researchers gathered hundreds of thousands of tweets containing key words like “vaccine” and “vaccination.” From this set, they eliminated all tweets that were not related to the H1N1 vaccine. They then recruited Penn State students to judge whether each of a subset of these 318,379 tweets expressed a positive sentiment about the vaccine (such as “Getting the flu vaccine today!”), a negative sentiment about the vaccine (like “Just found out that the H1N1 vaccine causes nerve disease”), or was neutral toward the vaccine. Based on these decisions, a computer algorithm was used to classify the rest of the tweets.

The researchers then modeled the likelihood that a given Twitter user would tweet either a positive or negative opinion about the H1N1 vaccine. The model included various predictors, such as how many positive or negative vaccine-related tweets users saw, the number of people they followed, and whether these people followed them back.

The results were unexpected, and, frankly, somewhat scary from a public health perspective. First, it was clear that negative information is extremely contagious: the more negative tweets a person received about the H1N1 vaccine, the more likely they were to tweet a negative sentiment about vaccination. Oddly, this finding didn’t hold for positive sentiments. In fact, the opposite was true: a high volume of positive tweets about the vaccine also increased the likelihood of negative vaccine-related tweets.

A similar contradiction was found when it came to reciprocal Twitter relationships, in which users follow each others’ tweets. Users who had many reciprocal connections with people who tweeted anti-vaccine sentiments also tended to express a lot of negative opinions about the H1N1 vaccine. But users who had many reciprocal connections with pro-vaccine users were not particularly likely to tweet positive opinions about the vaccine.

So why the asymmetry? If tweets bashing vaccines are so socially contagious, why don’t tweets that extol the virtues of vaccines spread quickly as well? Unfortunately, the researchers don’t know yet. It’s possible that there’s something about the way negative opinions are expressed on social media that makes them contagious, or it could be that scary information is especially likely to be passed on.

The big problem here is that negative messages about vaccines are often just plain false. For example, despite many studies that show no relationship between early childhood vaccinations and the incidence of autism, the autism-vaccine rumors refuse to die. This study illustrates how this kind of misinformation may spread so far so fast.

There are, of course, a few caveats to the findings. The study could only assess sentiments rather than actual behavior when it comes to vaccinations; social pressure might cause people to tweet negatively about vaccines, even though they themselves did get vaccinated against H1N1 (or vice versa). Furthermore, the research couldn’t capture any information about people who didn’t tweet about vaccinations during the study period, or those who don’t tweet at all.

But if future studies confirm that exposure to positive messages actually increases the incidence of negative messages—at least when it comes to vaccination—public health strategies may need to be revamped. Rather than flooding social media with vaccine-positive information, a better strategy may be to try to limit the spread of negative information about vaccination, or at least try to address what’s already out there.