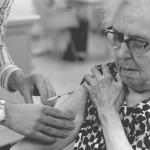 The “seeds” of Alzheimer’s disease may be transmitted from one person to another during certain medical procedures, scientists have found.

A study into people who died of a separate kind of brain disease after receiving injections of human growth hormone suggests that Alzheimer’s may also be a transmissible disease.

The findings have raised questions about the safety of some medical procedures, possibly including blood transfusions and invasive dental treatment, which may involve the transfer of contaminated tissues or surgical equipment.

The investigation has shown for the first time in humans that Alzheimer’s disease may be a transmissible infection which could be inadvertently passed between people.

Scientists emphasised that the new evidence is still preliminary and should not stop anyone from having surgery.

They have also stressed that it is not possible to “catch” Alzheimer’s by living with someone with the disease.

However, the findings of a study into eight people who were given growth hormone injections when they were children have raised the disturbing possibility that Alzheimer’s can be transmitted under certain circumstances when infected tissues or surgical instruments are passed between individuals.

Until now, it was thought that Alzheimer’s occurred only as a result of inheriting certain genetic mutations causing the familial version of the disease, or from random “sporadic” events within the brain of elderly people, said Professor John Collinge, head of neurodegenerative diseases at University College London.

“You could have three different ways you have these protein seeds generated in your brain. Either they happen spontaneously, an unlucky event as you age, or you have a faulty gene, or you’ve been exposed to a medical accident. That’s what we’re hypothesising,” he said.

“It’s important to emphasise that this relates to a very special situation where people have been injected essentially with extracts of human tissue. In no way are we suggesting that Alzheimer’s is a contagious disease. You cannot catch Alzheimer’s disease by living with or caring for someone with the disease,” he added.