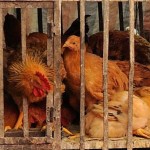 Chinese scientists have sounded the alarm after a new bird flu virus, H10N8, killed an elderly woman in December and infected another individual last month.

The fifth novel influenza strain to emerge in 17 years, the virus has a worrying genetic profile and should be closely monitored, they reported in The Lancet medical journal.

It appears to be able to infect tissue deep in the lung and may have features allowing it to spread efficiently among humans, they said.

“The pandemic potential of this novel virus should not be underestimated,” said the team headed by Yuelong Shu from the Chinese Centre for Disease Control and Prevention (CDC) in Beijing.

The warning stems from analysis of a virus sample taken from a 73-year-old woman who died in Nanchang, in southeastern Jiangxi province, on December 6 after being diagnosed with severe pneumonia and respiratory failure.

The Chinese authorities announced her death from H10N8 on December 18.

The Lancet study disclosed that a second case of H10N8 was recorded in Nanchang, on January 26. It did not give further details.

They are the first known human cases of H10N8, a virus that has been found only twice before in China – once in a water sample from a lake in Hunan in 2007, and the second time in live poultry in Guangdong province in 2012.

But this particular strain is different from the ones found in those two samples, the study said.

The big contributors to its genome are reshuffled genes from the H9N2 virus, the authors said.

This is a bird virus that erupted in Hong Kong in 1999 and has also contributed to the dangerous H5N1 and H7N9 flu viruses, the probe said.

Avian flu viruses pass from infected birds to humans in close proximity but typically do not transmit easily between humans.

The worry for health watchdogs is their potential to acquire an ability to jump easily from person to person.

H7N9, which emerged last year, has led to 159 human infections in China, including 71 deaths, according to a combined toll of official figures and an AFP tally of reports by local authorities.

H5N1, which first occurred among humans in Hong Kong in 1997, has caused 648 infections with 384 deaths since 2003, according to figures cited in The Lancet study.

The genome of H10N8, it said, pointed to a mutation in its so-called PB2 protein that, previous research has found, suggests an ability to adapt to mammals.

The virus also has a mutation in its haemagglutinin protein – a spike on the virus surface that enables it to latch onto other cells – that suggests it can infect deep in the lung, like H5N1, rather than the upper respiratory tract, the trachea.

Lab tests on the sample showed it could be attacked by Tamiflu, the frontline anti-viral drug.

Many questions remain, including how the woman was infected.

She had bought a live chicken at a poultry market several days before falling sick.

But she may have become infected beforehand, the scientists said. She did not handle the bird and no virus traces were found in poultry at the market.

In addition, the woman may have been an easy target for the virus because of poor health – she had coronary heart disease, high blood pressure and a muscle-weakening disease called myasthenia gravis.

Tests on people who had been in close contact with her concluded that no one else had been infected.

The second case of H10N8 “is of great concern”, said co-author Mingbin Liu of the Nanchang branch of China’s CDC.

“It reveals that the H10N8 virus has continued to circulate and may cause more human infections in the future.”