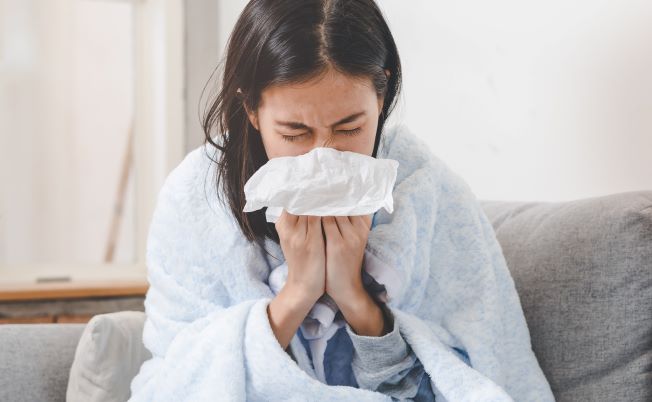 Triple threat. Tripledemic. A viral perfect storm. These frightening phrases have dominated recent headlines as some health officials, clinicians, and scientists forecast that SARS-CoV-2, influenza, and respiratory syncytial virus (RSV) could surge at the same time in Northern Hemisphere locales that have relaxed masking, social distancing, and other COVID-19 precautions.

But a growing body of epidemiological and laboratory evidence offers some reassurance: SARS-CoV-2 and other respiratory viruses often “interfere” with each other. Although waves of each virus may stress emergency rooms and intensive care units, the small clique of researchers who study these viral collisions say there is little chance the trio will peak together and collectively crash hospital systems the way COVID-19 did at the pandemic’s start.

“Flu and other respiratory viruses and SARS-CoV-2 just don’t get along very well together,” says virologist Richard Webby, an influenza researcher at St. Jude Children’s Research Hospital. “It’s unlikely that they will circulate widely at the same time.”

“One virus tends to bully the others,” adds epidemiologist Ben Cowling at the University of Hong Kong School of Public Health. During the surge of the highly transmissible Omicron variant of SARS-CoV-2 in Hong Kong in March, Cowling found that other respiratory viruses “disappeared … and they came back again in April.”

When a respiratory virus sweeps through a community, interferons can broadly raise the body’s defenses and temporarily erect a populationwide immune barrier against subsequent viruses that target the respiratory system. “Basically, every virus triggers the interferon response to some extent, and every virus is susceptible to it,” says immunologist Ellen Foxman at Yale University, who has been exploring interference between SARS-CoV-2 and other viruses in a laboratory model of the human airway.

Rhinoviruses, which cause common colds, can trip up influenza A (the most prevalent flu virus). RSV can bump rhinoviruses and human metapneumoviruses. Influenza A can thwart its distant cousin influenza B. “There are a lot of major health implications from viral interference,” says Guy Boivin, a virologist at Laval University who co-authored a review on viral interference earlier this year.

Still, interference isn’t a sure thing when multiple viruses are circulating. A household survey of 2117 people in Nicaragua, for example, found both flu and COVID-19 cases peaked at the same time in February, suggesting “limited viral interference,” the researchers concluded in a preprint. “I think of interference as a small push,” says Aubree Gordon, the University of Michigan, Ann Arbor, researcher who led the study with colleagues from Nicaragua’s Ministry of Health. “It depends on population immunity and when that virus last circulated and flu and COVID vaccination rates.”

As early as 1957, two virologists at the National Institute for Medical Research in London reported a convincing mechanism by which one animal virus might bump aside another. Alick Isaacs and Jean Lindemann probed a well-known mystery in virology circles: Membranes from chicken eggs inoculated with inactivated influenza virus cannot then be infected with a live version. Isaacs and Lindemann found that the chicken embryo secreted a chemical, which they dubbed interferon, that accounted for the interference. Unlike other immune responses—antibodies, for example—that target specific pathogens an animal has seen in the past, this nonspecific, rapid response is part of what’s known as the immune system’s innate arm.

A decade passed before interference between different viruses in humans received serious attention. Soviet virologist Marina Voroshilova at the Academy of Medical Sciences wondered why live but weakened versions of poliovirus used in vaccines sometimes didn’t grow in the guts of people who received them, failing to trigger protective immune responses. She found that harmless enteroviruses in the intestinal tract appeared to interfere with the polioviruses. Voroshilova then ran large field trials of vaccines composed of attenuated enteroviruses. They worked against those gut pathogens and also, surprisingly, warded off multiple respiratory viruses. Her team pegged the protection against the respiratory viruses to increased levels of interferons.

Testing of people in Scotland who had respiratory problems and sought medical care reveals peaks and troughs of influenza A and rhinovirus prevalence that indicate the two viruses likely interfere with each other. But few studies followed up on the early findings. “If you look at the virology literature, over 95% of studies are based on the study of a single virus,” says Pablo Murcia, a virologist at the University of Glasgow.

Sporadic epidemiologic reports have documented how waves of influenza seemed to crowd out RSV, parainfluenza, and other respiratory viruses. But confounding variables riddled the data. What if, for example, sick children who stayed home from school dodged the other viruses? And confirming which virus had sickened a person required culturing samples, which, until recently, was cumbersome and often inconclusive.

The influenza pandemic in 2009, driven by a novel flu virus dubbed pH1N1 that had recently emerged in pigs, put the study of viral interference on more solid footing. When populations have scant immunity to a novel flu strain, it can circulate widely outside of the winter season, as happened with pH1N1 worldwide. But groups from Sweden and France, who used the highly sensitive polymerase chain reaction (PCR) assays to detect viral genetic sequences, showed that in those countries, spikes of rhinovirus infections in late summer delayed the peaks of influenza until late fall, the normal start of flu season.

More recently, in one of the largest, longest, and most comprehensive studies of respiratory virus infections in humans, Murcia and colleagues used a PCR assay that can identify members of 11 viral families to probe nasal and throat samples from more than 36,000 individuals who sought care from the National Health Service in Glasgow over 9 years. Among other examples of viral interference, their data clearly showed rhinovirus and influenza A peaked at different times, demonstrating a “negative interaction” between the two viruses, the group concluded in the 26 December 2019 issue of the Proceedings of the National Academy of Sciences.

The next year, Foxman and colleagues reported finding interference after PCR testing for 10 different viruses in 13,000 respiratory samples from adults who sought care at the Yale New Haven hospital system. Between 2016 and 2019, about 7% of people tested positive for rhinovirus or influenza A virus, but of these 1911 samples, only 12 had both viruses, significantly fewer than expected, they reported in The Lancet Microbe. “It was great to see Ellen Foxman’s paper,” Murcia says. “She essentially showed similar results to ours, and they are completely independent studies.”

In the same report, Foxman pinned down the causal role of interferons. Like normal airways, the organoids her team makes from bronchial epithelial cells mount immune responses, including secreting interferons. Infecting organoids with rhinovirus nearly halted the growth of influenza A viruses added later. The rhinovirus infections led to the expression of a flood of interferon-related genes, the study showed. And when her team treated the organoids with drugs that blocked their cells from mounting an interferon response, the influenza viruses thrived.

Now, viral interference researchers are closely watching the newest respiratory virus to circle the globe. “What interactions could SARS-CoV-2 have with other viruses?” Murcia asks. “To this day, there are no robust epidemiological data.” For one thing, the widespread social distancing and mask wearing in many countries meant there was little chance to see interference in action. “There was almost no circulation of other respiratory viruses during the first 3 years of the pandemic,” Boivin says. Also, SARS-CoV-2 has many defenses against interferons, including preventing their production, which might affect its interactions with other viruses.

Still, Foxman has published evidence that, in her organoid model, rhinovirus can interfere with SARS-CoV-2. And Boivin’s team has reported that influenza A and SARS-CoV-2 each can block the other in cell studies.

Learning how SARS-CoV-2 and other viruses interfere with each other outside the lab will take prospective studies that closely monitor the same populations for several seasons. Cowling now has several, relatively small studies underway in Hong Kong, where people are repeatedly giving blood and respiratory samples, regardless of whether they have disease symptoms. It’s slow going, he says. “At the moment we don’t have many respiratory infections in Hong Kong,” Cowling adds, noting that masking is still common.

Cowling, Murcia, and Foxman all say a dearth of funding has limited their abilities to do large population studies. Still, they and others remain optimistic that we will soon have the best data yet about the tussle between SARS-CoV-2 and other respiratory viruses. “This will be the first real winter where we have a normal mixing pattern of people, and we hopefully will start to see some signals,” Murcia says. With multiple viruses running into each other for the first time in 3 years, he hopes to learn that interference remains alive and well, and able to blunt this winter’s triple threat.