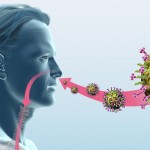 The first 3D image of a common cold virus generated by the fastest computer in the southern hemisphere could lead to new viral drug treatments, Melbourne scientists say.

Researchers have simulated the full genome of the human rhinovirus, responsible for about 40 per cent of all colds, to better understand how a new drug developed by Australian company Biota stops the virus spreading.

The drug, which is still in clinical trials, is targeted as a treatment for people with chronic lung diseases like asthma, chronic obstructive pulmonary disease and cystic fibrosis, for whom a common cold can be fatal.

The 3D image was one of the first created by a new super computer, the IBM Blue Gene Q, delivered to the University of Melbourne earlier this month.

St Vincent’s Institute of Medical Research deputy director Professor Michael Parker, who led the research, said better understanding of how the rhinovirus responded to the drug had implications for a wider range of illnesses.

He said rhinovirus was related to a family of viruses that cause serious diseases including polio and meningitis.

“An increase in understanding how existing drugs work with one virus will pave the way for the development of new anti-viral medications for these related viruses and hopefully save lives around the world,” Prof Parker told reporters on Monday.

Researchers led by Prof Parker worked with computer specialists from IBM and the Victorian Life Sciences Computation Initiative to create the 3D simulation.

Dr Mike Kuiper from the Victorian Life Sciences Computation Initiative said it was the first time the entire genome of the virus had been modelled.

The super computer is the fastest in the southern hemisphere and the 31st fastest in the world, according to Dr John Wagner, manager of IBM Research Collaboratory for Life Sciences Research.

He said the computer was capable of up to 836 trillion numerical calculations a second and was also the most energy efficient computer in the world.