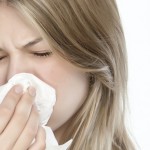 In an effort to combat drug-resistant flu virus strains, researchers have developed a new class of drug that prevents the virus from spreading between cells. When the flu virus infects a cell, it binds to the cell and inserts its own RNA into the cell.

The viral genes use the host’s own genetic machinery to replicate virus particles. The attached virus uses an enzyme, called neuraminidase, to cut its connection to the cell and then moves on to infect the next cell.

According to the researchers, this new class of drug works by binding to neuraminidase, preventing the virus from being disconnected from the cell.

Steve Withers, the study’s senior author states, “Our drug agent uses the same approach as current flu treatments – by preventing neuraminidase from cutting its ties with the infected cell. But our agent latches onto this enzyme like a broken key, stuck in a lock, rendering it useless.”

The researchers are hopeful that the new drug would be more effective for a longer period of time because resistant virus strains would not be able to arise without developing an entirely new method of infection.