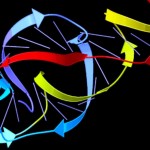 Scientists have a promising new approach to combating deadly human viruses thanks to an educated hunch by University of California, Riverside microbiology professor Shou-Wei Ding, and his 20 years of research on plants, fruit flies, nematodes and mice to prove his theory true.

Researchers led by Ding, who heads a lab in UC Riverside’s Institute for Integrative Genome Biology, have discovered that, like plants and invertebrate animals, mammals use the RNA Interference (RNAi) process to destroy viruses within their own cells.

Their findings will be published in the Oct. 11 issue of the journal Science.

Until now, scientists were unable to prove that mammals use RNAi for killing viruses, but ironically, it was Ding’s earlier research into plants, nematodes and fruit flies that helped him find the key: viruses have been outwitting that innate protection in our cells by using proteins to suppress our virus-killing mechanism.

Remove the suppressor protein from the virus, Ding’s researchers discovered, and the subject’s body will quickly eliminate the virus using the RNAi process, which sends out small interfering RNAs (siRNAs) to kill the disease.

In their research on young mice, for instance, all the subjects died when they were infected with the Nodamura virus, but when Ding’s researchers removed the suppressor protein called B2 from the virus, the infected mice began producing huge armies of the virus-attacking siRNAs and lived, unaffected by the otherwise lethal infection.

“Many have tried to do this, that is, find the viral siRNAs in mammals, but they could not find the key,” said Ding. “The key was our prior knowledge of the B2 protein in the Nodamura virus, a virus few people know about. Other scientists asked me, ‘What is the Nodamura virus?’ They have been studying the more well-known human viruses, but Nodamura virus infection of mice proves to be the best model.”

How did Ding know where to look? The China native was partly acting on a hunch that started when he was a graduate student at the Australia National University in the late 1980s. There, during a lecture, he learned that the genomes of viruses infecting plants and animals are actually very similar, even though plants and animals are very different.

That, and further discussions with his mentor Adrian Gibbs, an expert on molecular evolution of viruses and a fellow of the Australian Academy of Sciences, “made me think there must be a common anti-viral mechanism in plants and animals to keep their viruses similar,” he said.

Ding produced the first evidence for that hypothesis while working with Bob Symons in the Waite Institute in South Australia, studying cucumber mosaic virus, a devastating, aphid-carried disease that infects more than 1,000 plant species, including many important crops.

Using computational analytical skills learned from Gibbs, Ding discovered a small gene in the virus other scientists had overlooked. He named the gene 2b and showed that it plays an essential role in helping the virus spread within the host plant. Based on his results, and published studies on the B2 protein of Flock house virus, an insect pathogen, Ding proposed in a 1995 paper that 2b and B2 proteins act by suppressing the host’s antiviral defense.

Fueled by that idea, Ding moved to Singapore in 1996 to set up his own laboratory in the Institute of Molecular Agrobiology. There, in collaboration with a British group led by RNAi-expert David Baulcombe, Ding’s group discovered that the 2b protein did indeed suppress the RNAi virus-fighting properties in plants. Further, the group found that the 2b proteins of the related viruses all have the suppressor activity even though they share limited sequence similarities.

Ding joined the faculty at UCR in December of 2000 to test the other half of his hypothesis: does the B2 protein of Flock house virus suppress RNAi in its animal host?

Although RNAi was known as a major antiviral mechanism in plants by that time, few believed it was also true in the animal kingdom, which was known to fight viral infections by many other well-defined mechanisms. Over the next five years, Ding used Flock house virus to discover that fruit flies and C. elegans nematodes have the same RNAi virus-killing properties as plants, but the B2 in the virus stop their RNAi defenses from working. Remove the B2, and the hosts produce massive amounts of siRNAs and rapidly destroy the virus.

The findings, which were featured in a Science cover story in 2002, showed that RNAi is a common antiviral defense in plants, insects and nematodes, and explained why viruses have to keep a protein to suppress that defense. It also took Ding deeper into his fundamental premise—”If RNAi remains as an effective antiviral defense in plants, insects and nematodes after their independent evolution for hundred millions of years, why would it stop working with mammals?”

To answer this question, Ding decided to use a cousin of the Flock house virus—Nodamura virus—that is lethal to young mice. In collaboration with Ding, the lab of Olivier Voinnet at the Swiss Federal Institute of Technology in Zurich also reported in an accompanying paper the detection of viral siRNAs in cultured mouse embryonic stem cells infected by the Encephalomyocarditis virus. These findings have opened the door to new ways to combat dangerous human viruses.

Ding’s next goal is to raise $5 million so he can spend about five years studying new vaccines for human pathogens such as dengue fever. He is carefully optimistic about the findings to come.

“Maybe this is what we have been missing in knowing how humans combat viral infections,” he said. “There are many different antiviral mechanisms in our bodies, but maybe RNAi functions as the most important antiviral defense mechanism. Maybe this is the one that really matters.”