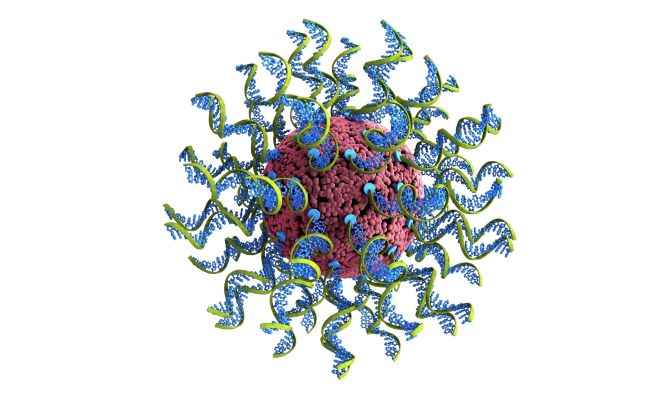 Just one dose of a new nanoparticle-based COVID-19 vaccine was enough to produce an immune response in animals on track with vaccines currently in clinical use. And with minor changes, Northwestern University researchers hope the same vaccine platform could target other infectious diseases.

In a new study, 100% of mice who received the protein-based immunization survived when challenged with lethal doses of the SARS-CoV-2 virus, which causes COVID-19. None of the mice experienced lung damage due to SARS-CoV-2 exposure. All mice who did not receive this nanoparticle vaccine died in a 14-day trial.

The results, published this week in the Proceedings of the National Academy of Sciences, outline the structure-function relationships between the first spherical nucleic acid (SNA) vaccine developed to protect against viral infections.

“What makes this vaccine different than other vaccines is the approach we take to design them,” said Dr. Michelle Teplensky, co-first author of the paper.

Called SNAs, the nanoparticles that house the immune target are a form of globular DNA that can enter and stimulate immune cells with extreme efficiency. SNAs have been tested in more than 60 cell types. Researchers experimentally determined the ideal ratio between the SNA’s shell and core density that produces the most potent response.

SNA vaccines have been used to treat mice with triple negative breast cancer — and more vaccines for other cancers are in development.

Chad A. Mirkin, the inventor of SNAs and the paper’s corresponding author, led the study and said the platform can translate to infectious diseases.

“This is a remarkable demonstration of rational vaccinology — the idea that the structure of a vaccine, as opposed to just components, can have a profound influence on efficacy,” Mirkin said. “While we have previously shown this to be the case for cancer immunotherapies, this is the first demonstration for an infectious disease.”

Mirkin is the George B. Rathmann Professor of Chemistry in Northwestern’s Weinberg College of Arts and Sciences, director of the International Institute of Nanotechnology and member of the Robert H. Lurie Comprehensive Cancer Center of Northwestern University.

Vaccines typically take years to develop. But with COVID-19 came astonishing advancements in this arena. Mirkin challenged Teplensky, a postdoctoral fellow in Mirkin’s lab, to work with Ph.D. student and co-first author Max Distler, to evaluate whether the SNA platform could be used to create a potent vaccine, and expand its scope of impact. The two finished the project in just nine months — roughly the same amount of time as commercial developers.

Typical viral immunizations consist of a mixture of molecules from the virus (called antigens) that tell the immune system what its target will be (the virus), and other molecules (called adjuvants) stimulate the immune system to boost the body’s ability to tackle that target when it appears later. Because the mixture isn’t traditionally packaged together, researchers predict that cells within patients are not getting a potent dose of both antigens and adjuvants.

That’s where structure comes into play. Mirkin coined the term “rational vaccinology” to describe how co-delivery and timing of these two drugs via one nanoparticle can make vaccines more effective. Tiny changes at the nanoscale can have big implications for a vaccine’s efficacy and predictability.

Mirkin’s team packaged the antigen (a portion from COVID-19’s infamous spike protein) inside the core of an SNA, and used a specific sequence of DNA known to stimulate the immune system (adjuvant) as the radial shell surrounding the core. The researchers injected mice under the skin, causing an immune response to the spike protein, and then monitored antibody production in the weeks following injection.

Two weeks following the injection, mice vaccinated with the SNA vaccine had the highest antibody production compared to those vaccinated with a simple saline mixture of the same components, even outperforming other formulations containing commercially used adjuvants (which have been used in formulations of shingles, Hepatitis B and flu vaccinations) by 14-fold.

Antibodies correlate to protection against infection, establishing the platform’s potential in the COVID-19 and infectious disease space. Protein-based vaccines also have fewer side effects and can be stored at normal refrigerator temperature, lowering production and distribution costs considerably.

The researchers looked at papers from commercially available COVID-19 vaccinations and found other studies’ final antibody production at two weeks was “right on track” with their own.

Just to be sure, the team sent their vaccine off to Argonne National Laboratory and allowed them to be put to the test by vaccinating mice and then infecting them with high doses of the SARS-CoV-2 virus in a double-blind study. One hundred percent of mice dosed with the SNA vaccine survived through the end of the trial with no lung damage caused by COVID-19 pneumonia.

Using COVID-19 as a case study to compare how well the vaccine worked was mainly practical. But it also calls attention to the broader implications of the SNA as an infectious disease platform.

Teplensky says that COVID-19 caused a shift in behavior toward infectious diseases. “People didn’t recognize and appreciate the emergent power that infectious disease can have,” Teplensky said. “We saw an opportunity to use COVID as a case study to shed light on the shortcomings in the vaccination space.”

Distler said, “with this case study, although the results are quite impressive, the goal was not to compete with existing COVID vaccines. We’re preparing for the next mutation, or the next disease in need of a highly structured vaccine because eventually there will be another emergent disease.” According to the researchers, the platform could even be used to target something as complex as HIV.

“The modularity of this approach implies that a quick tweak might only be required to make a new vaccine for a future virus, especially if what we’ve observed previously with the cancer vaccine works,” Mirkin said. “All we’d need to do is change what we’re teaching the immune system to target.”

The paper, “Spherical Nucleic Acids as an Infectious Disease Vaccine Platform,” came together as a collaboration between Northwestern scientists, physicians, and engineers, the Argonne National Laboratory and University of Chicago. The research was supported by the Air Force Office of Scientific Research (award FA9550-17-1-0348), the Polsky Urologic Cancer Institute of the Robert H. Lurie Comprehensive Cancer Center of Northwestern University at Northwestern Memorial Hospital and the National Cancer Institute of the National Institutes of Health (under awards R01CA208783 and P50CA221747).