Pertussis Outbreak May Be Worst in 50 Years, CDC Says 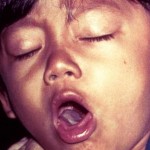 Reported cases of pertussis are at their highest level in 50 years, a top official with the U.S. Centers for Disease Control and Prevention said Thursday, adding that outbreaks in several states should encourage all children and adults to get vaccinated.

Dr. Anne Schuchat, director of National Center for Immunization and Respiratory Diseases, said doctors across the nation have reported more than 18,000 cases of pertussis so far this year. That is more than twice as many cases as there were at this time in 2011 and the first time since 1959 that so many cases have been reported by this time in the year.

Pertussis, or whooping cough, is a bacterial infection involving the respiratory tract that is easily spread by coughing and sneezing. It can start out start out like the common cold, but can be a very serious infection, particularly for infants under the age of 1, who are too young to complete the full vaccination series.

While some doctors say that part of the surge in reported cases can be credited to better diagnostic tests and increased awareness, the casualties thus far underscore a very real problem. Nine infants have died from pertussis so far this year in the United States. The 13-to-14-year-old age group has been hit particularly hard. In Washington state, the number of cases this year has surpassed 3,000 — already more than three times as many as all of last year. Washington state Secretary of Health Mary Selecky declared a statewide pertussis epidemic on April 3.

“Unvaccinated kids are at eight times higher risk to getting pertussis compared to kids who have been vaccinated,” said Schuchat. “Vaccinated kids who do develop pertussis have a milder course. They’re also less infectious than unvaccinated children.”

Health officials added that all adults who have not been vaccinated against pertussis should receive the TDaP vaccine, especially pregnant women and those who will have contact with babies. Pertussis outbreaks generally occur in peaks and waves. Even with vaccination, immunity tends to wane over time.

An estimated 84 percent of toddlers in the U.S. have received their complete course of vaccination. However, only 8 percent of adults are currently vaccinated.

“Our biggest work is to get adults immunized,” said Dr. Mark Sawyer, chairman of the CDC’s pertussis work group and professor of pediatrics at UCSD. “This is particularly relevant to pregnant women and new grandparents, who will have contact with infants.”

What’s unusual is the fact that so many 13- and 14-year-olds are falling ill with the infection. The CDC is looking into whether this could be attributed to a change implemented in 1997 that saw the vaccine used to immunize children change from a version that was taken off the market in the U.S. because of possible neurologic side effects.

The CDC is launching an investigation to find out what is contributing to the unusual features of this outbreak. Researchers are also looking at why the protection offered from the current vaccine is not complete.

Dr. Gregory Poland of the Mayo Clinic has had personal experience with pertussis, not only as a physician, but also as a father of a child who suffered through pertussis at the age of 13 despite being fully vaccinated.

“When I first heard my son cough, I knew he had pertussis,” Poland said. “Even though I treated him immediately, the cough lasted for 100 days. He literally kept the family awake for months.”

Dr. Len Horovitz, an infectious disease specialist at Lenox Hill Hospital in New York, is frustrated that despite the prevalence of media coverage, adults are not requesting the vaccine.

“How much relentless coverage and repetition of medical information [does it take] for the public to finally grasp an epidemic?” he asked. “People aren’t listening, aren’t watching or aren’t paying attention.”