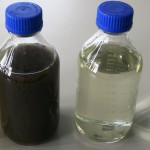 The polio virus was detected in 30 sewage samples in Israel, the World Health Organization confirmed, spurring Israel to step up its vaccination efforts.

The samples from 10 sites in Israel were mostly from the southern part of the country, according to an update published on the WHO website in mid-July.

Dr. Nima Abid, a WHO representative in Pakistan, told a local news website over the weekend that the virus is the same as one prevalent in Pakistan.

It is not known how the virus traveled to Israel; Israel and Pakistan do not have diplomatic relations. Similar virus samples also were found in Egypt.

Israel’s Health Ministry has stepped up a vaccination campaign to inoculate children in the South with an additional weakened live polio vaccine.

Across Israel, the vaccination rate against polio is 94 percent, according to WHO.

Environmental surveillance sampling, including sampling of wastewater, was increased in Israel and implemented in the West Bank and Gaza, where the virus has not been detected since 2002, according to WHO.

Israel experienced its last case of polio in 1988.

A WHO delegation toured the Negev recently. The virus was first found in May in regular sewage samples taken from the Negev city of Rahat.