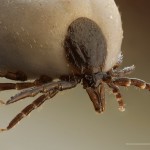 Scientists not yet sure of risk to humans

A rare virus has been found in ticks that are common in the southeastern United States.

The Tacaribe virus is a so-called arenavirus. Some of the viruses in this family are associated with severe hemorrhagic (bleeding) disease and high death rates among people in South America and sub-Saharan Africa, according to the University of Florida researchers.

The virus has never before been found in animals or people in the United States, but the researchers found it in nearly 10 percent of Lone Star ticks they trapped in north central Florida.

“This finding is exciting because it expands the range in which these viruses might be circulating in the environment,” study author Katherine Sayler said in a university news release. “It also raises some really interesting questions about human risk,” she added.

“We never thought we would find an arenavirus in a tick. These types of viruses are usually transmitted by rodents,” she noted.

While the Tacaribe virus has been found in bats, research has shown they are not the natural host, and experts have been unable to find the virus in other mammals.

“We still don’t know which animal is the natural host of this virus, and whether [these] ticks have harbored the virus for a long time, or if this is something new,” Sayler said. “Without knowing if local rodents are a major reservoir of the virus, the extent that Floridians are sickened by the virus and whether ticks can transmit the virus to humans, it makes it hard for us to know if and when there would be an outbreak. Clearly, much more work must be done.”

Further research is needed “to determine if the virus has been around and circulating for a long time, or if it has been absent from Florida and was introduced [recently],” Sayler concluded.

The study was published recently in the journal PLoS One.