Price tag of saving the world from disease: $344 billion 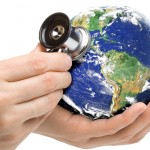 Infectious diseases are incubating everywhere across the world—ranging from the deadly Ebola virus to the more common yet debilitating influenza—to often devastating effect. It raises the question of how large a premium should world governments pay to insulate their economies from global pandemics.

That eye-popping figure is one of several takeaways of a group of scholars calling for a “global strategy” to mitigate the impact of threats to public health. In a recent paper published in the Proceedings of the National Academy of Sciences (PNAS) journal, economists and public health experts said emerging pandemics were increasing in their virulence and frequency.

The grim circumstances, which include the Ebola outbreak ravaging parts of Africa and an increasingly tough flu season in the U.S., calls for “globally coordinated strategies to combat” the hydra-headed threats posed by widespread disease—which the scientists say have their origins in animals. By pooling resources and implementing a host of programs and policies, governments could curtail the spread of infectious viruses by 50 percent if the measures were implemented within a 27-year span, the paper said.

Of course, there’s the matter of the price tag, which is more than South Africa’s nominal gross domestic product and is nearly as large as the U.S. Defense Department’s fiscal year 2015 budget.

In response to emailed questions by CNBC, co-author Peter Daszak said the money would be funneled into “mitigation programs” that isolate the first cluster of cases at their source. The funds would also be spent on hospitals and diagnostic labs in West Africa, and creating a web of information to identify and track diseases.

“There are [already] programs that do this,” said Daszak, a disease ecologist who leads the EcoHealth Alliance in New York. “We’re working with USAID [U.S. Agency for International Development] on a program called ‘PREDICT’ where we are using development funds to build labs and train people in these ‘hotspot’ countries. DoD and other agencies are doing similar work.”

The study arrives at a time when public health officials are struggling to contain a blitz of mysterious outbreaks. In recent months, isolated cases of Ebola, Legionnnaire’s disease, enterovirus and Chikungunya—all sicknesses most common in developing economies—have all appeared in the U.S.

In the larger scheme, the nearly $344 billion call to arms may be a reasonable price to pay to prevent yet another shock to global growth, one that’s already taking a heavy toll on African economies. In a December study, the World Bank said West Africa’s Ebola pandemic had shaved off about two-thirds of Liberia’s and Sierra Leone’s growth.

For those who think the flu isn’t that pernicious, think again: A Centers for Disease Control study once estimated that a massive flu outbreak could cost anywhere between $71 billion to $166.5 billion.

“The worst diseases economically are those that can be transmitted rapidly, and that cause panic and scare, because it’s the perception of risk that costs the most,” Daszak told CNBC. As one example, he cited the 2002-03 SARS outbreak that killed less than 1,000 people globally but cost the global economy some $40 billion in damage to trade and business, according to a study by the Brookings Institution.

Although the paper argued that the world has nearly three decades to assemble the infrastructure to confront the challenge, Daszak said the actual timeline is far less generous.

“Given the time it’s taken to even get countries to build this capacity, the window to start work on the global approach is basically right now,” he said. “If we don’t get this organized within 27 years, it becomes so costly (given the continuing rise in the number of emerging diseases each year) to deal with them that it’s not economically effective, the damages will be so high.”

Like many mathematical models, assumptions and models could easily be overtaken by events. “It’s quite likely that something very extreme could happen within the next year, five years or 10 years.”