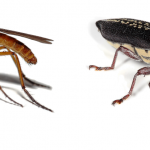 Vaccines developed using proteins rather than live viruses can help protect animals and subsequently humans from insect-borne viruses, according to Alan Young, chief scientific officer for Medgene Labs, an animal health company that develops therapeutics and diagnostics, including vaccines.

“Platform technologies—that is where our niche is,” says Young, who is also a veterinary science professor at South Dakota State University. Medgene uses advances in molecular biology and technologies licensed from the university.

The company’s initial vaccine formulation targets Rift Valley Fever, found in Africa and the Arabian Peninsula. The viral disease is particularly devastating to sheep, with a mortality rate of 90 percent in lambs and 10 percent in adult sheep. The virus affects cattle, camels and goats similarly, but to a lesser extent. It can be spread to humans in the same manner as animals—through the bite of an infected mosquito.

Of the vaccines available, the one produced from a live virus can result in spontaneous abortions in pregnant ewes and the one from an inactivated virus does not provide long-term immunity, according to the Centers for Disease Control and Prevention.

Medgene is developing a vaccine to alleviate both problems. Four ewes in an experimental group lambed after being vaccinated, according to director of lab operations, Jessica Zweibahmer. The next step will be to test the lambs for antibodies to see if the immunity crossed over from mother to fetus.

Young explained that using proteins rather than live agents to produce an immune reaction significantly reduces the chance of side effects. That makes Medgene’s vaccines both safe and effective.

“We approach vaccine targets from a virus family perspective,” Young says. For instance, what works for Rift Valley Fever can then be applied to Heartland virus, which is in the same family, and a vaccine for Porcine Epidemic Diarrhea virus can be expanded to Porcine Delta Corona virus.

Recent changes in the way regulatory agencies license vaccines could reduce the path to licensing a vaccine to as little as 12 months, according to Young.

“We have a well-developed expression technology to produce these proteins,” Young says. “Inserting a different section in the sequence will allow us to produce a new vaccine more quickly.”