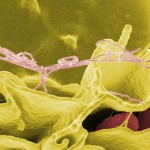 Scientists are working to improve the effectiveness of a Recombinant Attenuated Salmonella Vaccine by modifying its ability to survive the hostile stomach environment, according to a recent study published in the Journal of Bacteriology.

Katie Brenneman, the study’s lead author, and her colleagues with the Biodesign Institute’s Center for Infectious Diseases and Vaccinology at Arizona State University tested multiple strategies to restore acid-resistance in multiple Salmonella vaccine strains. An improved survival rate of the vaccine would allow more of the bacterial cells to generate a strong immune response against various species of Salmonella.

“Even though wild-type strains of Salmonella are quite capable of surviving the acidic environment of the stomach, it is surprisingly difficult to deliver a live Salmonella vaccine orally,” Brenneman said. “Many vaccines have mutations that leave them especially vulnerable to low pH, which means a large proportion of the vaccine cells are killed before they reach the intestine and thus are unable to do their job of delivering vaccine targets to the immune system. We’re trying to compensate for that increased acid sensitivity by increasing expression of the normal acid resistance systems.”

According to the U.S. Centers for Disease Control and Prevention, Salmonella species caused multi-state outbreaks linked to contaminated tuna fish, cantaloupe, poultry, ground beef and peanut butter in 2012. Through genetic manipulation, Salmonella typhi can be rendered harmless and used in vaccines to prevent illness. The RASVs carry antigens for a particular bacterial disease and stimulate the immune system to respond.

The researchers used a special promoter, the sugar rhamnose, to trigger the acid resistance in the cultured Salmonella cells. The team confirmed the rhamnose-regulated system was able to rescueSalmonella from exposure to low pH conditions.

The findings could lead to the efficient and cost-effective creation of highly acid resistant vaccine strains controlled by a rhamnose promoter.

“In future studies, we will need to validate that this system, or other similar systems under construction, will improve the immunogenicity of an RASV,” Ken Roland, a co-author of the study, said. “This work is ongoing, but I can tell you that we have preliminary data supporting the idea that our rhamnose-regulated arginine decarboxylase system can significantly enhance the immunogenicity and protective immunity of an RASV.”