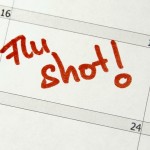 Every year, between 3,000 and 49,000 people die from the flu and its complications. That’s a drop in the bucket compared to the influenza pandemic of 1918, which took the lives of between 20 million and 40 million people. The Centers for Disease Control and Prevention urges people to get a flu vaccine every year, especially people who are at high risk from flu complications.

Generally the choice for a flu vaccine comes in the form of a nasal mist that employs a live virus, or flu shots that rely on a killed virus — the concept being that when the pathogens are introduced in a mild form, the body is able to build sufficient antibodies to defend against the full strain, should it strike.

But now a revolutionary new way to make a one-time, universal influenza vaccine has been discovered by a researcher and his partners at Georgia State University’s Center for Inflammation, Immunity and Infection.

Associate Professor Sang-Moo Kang and his team created the one-time vaccine by using recombinant genetic engineering technology that does not use a seasonal virus. Generally, flu vaccines are altered every year to combat the strains that are predicted to be relevant for the season. But cleverly, the new vaccine uses a virus’ small fragment, a basic building block that does not vary among the different strains of flu viruses. Using this process, the immune system can learn to recognize any type of flu virus and attack the pathogen.

“We can now design a vaccine that makes it easier to induce a good immune system response to recognize a pathogen, regardless of how the surface proteins of the virus change,” Kang said.

Along with the convenience of a one-time vaccine, using only a fragment rather than the live or killed viral vaccine would be safer for people with weakened immune systems, young children and the elderly, Kang said.