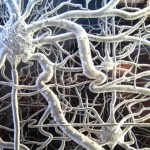 Viruses often spread through the brain in patchwork patterns, infecting some cells but missing others. New research at Washington University School of Medicine in St. Louis helps explain why. The scientists showed that natural immune defenses that resist viral infection are turned on in some brain cells but switched off in others.

“The cells that a pathogen infects can be a major determinant of the seriousness of brain infections,” says senior author Michael Diamond, MD, PhD, professor of medicine.“To understand the basis of disease, it is important to understand which brain regions are more susceptible and why.”

While some brain infections are caused by bacteria, fungi or parasites, often the cause is a virus, such as West Nile virus, herpesvirus or enteroviruses.

For their study, now available online in Nature Medicine, the researchers focused on granule cell neurons, a cell type that rarely becomes infected. They compared gene profiles in granule cells from the cerebellum with the activity in cortical neurons in the cerebral cortex, which are more vulnerable to infection.

The comparison revealed many differences, including a number of genes in cortical neurons that were less well-expressed—meaning that for those specific genes there were fewer copies of mRNA, the molecules that relay genetic information from DNA to the cell’s protein-making mechanisms.

Next, the researchers transferred individually 40 of those genes into cortical neurons and screened the cells for susceptibility to viral infection. The test highlighted three antiviral genes that are induced by interferon, an important immune system protein. When the expression level of these genes increased in cortical neurons, the cells’ susceptibility to viral infection decreased.

The researchers also identified mechanisms that make some of these changes in genetic programming happen: regulatory factors known as microRNA, and differences in the way DNA is modified in the cell nucleus, both of which can affect gene expression levels.

Some of the genetic changes are only helpful against specific viral families, while others are effective against a broader spectrum of viruses and bacteria. The scientists can’t say yet if the differences in infection susceptibility are driven by the need to prevent infection or if they are a by-product of changes that help neurons in particular brain regions perform essential functions.

To learn more about how these innate immune genes help cells resist infection, Diamond and his colleagues are disabling them in the brains of mice.