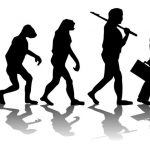 In a new study published in the journal eLife, scientists apply big-data analysis to reveal the full extent of viruses’ impact on the evolution of humans and other mammals. Their findings suggest 30% of all protein adaptations since humans’ divergence with chimpanzees have been driven by viruses.

When an environmental change occurs, species are able to adapt in response due to mutations in their DNA. Although these mutations occur randomly, by chance some of them make the organism better suited to their new environment. These are known as adaptive mutations.

In the past decade, scientists have discovered a large number of adaptive mutations in a wide variety of locations in the genome of humans and other mammals.

The fact that adaptive mutations are so pervasive is puzzling. What kind of environmental pressure could possibly drive so much adaptation in so many parts of the genome?

Viruses are ideal suspects since they are always present, ever-changing and interact with hundreds to thousands of proteins.

“When you have a pandemic or an epidemic at some point in evolution, the population that is targeted by the virus either adapts, or goes extinct,” said lead author Dr. David Enard, of Stanford University. “We knew that, but what really surprised us is the strength and clarity of the pattern we found.”

Previous research on the interactions between viruses and proteins has focused on individual proteins that are directly involved in the immune response. This is the first study to take a global look at all types of proteins.

“The big advancement here is that it’s not only very specialized immune proteins that adapt against viruses,” Dr. Enard said.

“Pretty much any type of protein that comes into contact with viruses can participate in the adaptation against viruses. It turns out that there is at least as much adaptation outside of the immune response as within it.”

The team’s first step was to identify all the proteins that are known to physically interact with viruses. After reviewing tens of thousands of scientific abstracts, they culled the list to 1,256 proteins of interest.

“We identified 1,256 proteins that physically interact with viruses out of a total of 9,861 proteins with orthologs in the genomes of the 24 mammals included in the analysis,” the scientists said.

The next step was to build big-data algorithms to scour genomic databases and compare the evolution of virus-interacting proteins to that of other proteins.

The results revealed that adaptations have occurred three times as frequently in virus-interacting proteins compared with other proteins.

“We’re all interested in how it is that we and other organisms have evolved, and in the pressures that made us what we are,” said senior author Dr. Dmitri Petrov, also from Stanford University.

“The discovery that this constant battle with viruses has shaped us in every aspect — not just the few proteins that fight infections, but everything — is profound.”

“All organisms have been living with viruses for billions of years; this work shows that those interactions have affected every part of the cell.”

Viruses hijack nearly every function of a host organism’s cells in order to replicate and spread, so it makes sense that they would drive the evolution of the cellular machinery to a greater extent than other evolutionary pressures such as predation or environmental conditions.

The study sheds light on some longstanding biological mysteries, such as why closely-related species have evolved different machinery to perform identical cellular functions, like DNA replication or the production of membranes.

Scientists previously did not know what evolutionary force could have caused such changes.

“This paper is the first with data that is large enough and clean enough to explain a lot of these puzzles in one fell swoop,” Dr. Petrov said.