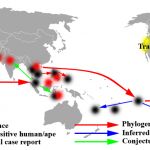 Using genome sequences for a handful of Zika viruses (ZIKV), an international team estimates that the virus made its way to Brazil sometime in 2013, potentially piggybacking with travelers from affected areas in the Pacific Islands.

As they reported online in Science, the researchers sequenced seven ZIKV genomes isolated from infected individuals in Brazil, including an infected newborn with microcephaly. Using phylogenetic information gleaned from the sequences, together with phylogenetic clues, they estimated that ZIKV was introduced to Brazil once between May and December 2013 — a time period that overlaps with an uptick in air travel from ZIKV endemic regions, according to airline flight data tapped for the analysis.

Co-senior author Pedro Fernando da Costa Vasconcelos, an infectious diseases and virology researcher with the Brazil Ministry of Health’s Evandro Chagas Institute, explained that this earlier-than-anticipated introduction may help to explain the apparent explosiveness of the 2015 outbreak.

“It had at least a year to spread … before [being] recognized,” Vasconcelos told GenomeWeb in an email. He noted that there may also have been delays in recognizing ZIKV cases in Brazil because some of the symptoms resemble those produced by dengue virus or Chikungunya virus.

In contrast to a mainly self-limiting condition called Zika fever, ZIKV infections in Brazil and beyond have been implicated in microcephaly and other congenital conditions — features that may be related to the virus’ ability to infect neural progenitor cells, fetal brain tissue, and amniotic fluid, as shown in some recent studies. While the genome sequences did not bolster causal ties between ZIKV and microcephaly, Vasconcelos said he is convinced of the association based on prior studies of brain samples from deceased infants infected with the virus.

The Zika virus is named for the Ugandan forest where it was initially identified in a rhesus monkey in the late 1940s. Regions in Africa, Southeast Asia, and the Pacific Islands have seen outbreaks of the virus since the earliest human cases in the 1950s, but the Zika virus was not detected in Brazil until May 2015.

Since then, some 30,000 ZIKV infections have been reported Brazil and the virus has spread over large swaths of South and Central America. As of last week, more than 250 travel-associated cases have been reported in the US to the Centers for Disease Control and Prevention, according to the agency’s web site.

For this new study, the researchers attempted to retrace the history of ZIKV in Brazil, by sequencing the seven ZKIV isolates using Roche 454 and Ion Torrent instruments. Four of the isolates came from individuals with self-limited Zika infections, one came from a fatal case of ZIKV in an adult, one isolate came from an infected blood donor, and one ZIKV sample was from a newborn with microcephaly and other congenital conditions.

In general, the ZIKV genome, which is made up of single-stranded RNA, spans some 10,700 bases and codes for a polyprotein that gets chopped up to produce 10 structural and non-structural proteins. When the team compared the newly generated genomes with sequences available for other strains from Brazil, it saw differences scattered over much of the virus’ coding genome, including 32 nucleotide changes in the microcephaly-related isolate and 34 such changes in the ZIKV isolate from the deceased adult.

Nevertheless, Vasconcelos noted that all of the mutations identified were synonymous changes that would not be expected to alter amino acid sequences or antigenic features of the virus.

The overall mutation rate appeared to be on par with that described for ZIKV in the past, the researchers noted, and isolates from Brazil and other parts of the Americas all clustered within a single group sharing genetic ties to an Asian ZIKV genotype that’s descended from the same ancestor as a strain detected in French Polynesia in 2013.

The diversity of the ZIKV strains in Brazil, coupled with the team’s molecular clock estimates, suggest Brazil was the first country where ZIKV made its home in the Americas. Though the precise timing and mode of introduction is debatable, Vasconcelos and colleagues suspect air travel may be to blame: Whereas fewer than 4,000 airline passengers made their way from ZIKV endemic areas to Brazil at the beginning of 2013, airline records indicated that that jumped to more than 5,700 passengers from the same locales over the following year.

Vasconcelos and his colleagues at Brazil’s Ministry of Health have already started sequencing additional ZIKV isolates from Brazil.