Emerging H7N9 virus has potential to cause a pandemic 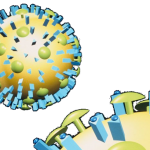 Virus attaches to both upper and lower respiratory tract epithelium, according to report in The American Journal of Pathology.

A new study has found that a novel avian-origin H7N9 influenza A virus, which has recently emerged in humans, attaches moderately or abundantly to the epithelium of both the upper and lower respiratory tracts. This pattern has not been observed before for avian influenza A viruses. The report, published in the October issue of  The American Journal of Pathology, suggests that the emerging H7N9 virus has the potential to cause a pandemic, since it may transmit efficiently in humans and cause severe pneumonia.

The first report of infections of humans with the influenza A virus of the subtype H7N9 surfaced in March 2013. Three patients from eastern China developed severe pneumonia and acute respiratory distress syndrome and died as a result. By May 30, 2013, the H7N9 infection was confirmed in 132 patients from China and Taiwan, 37 of whom died, according to the World Health Organization. Infected poultry were thought to be the source of the virus.

In the current study, investigators focused on the virus’ pattern of attachment in order to assess its potential transmissibility and virulence.

“Abundant virus attachment to the human upper respiratory tract correlates with efficient transmissibility among humans,” explains Thijs Kuiken, DVM, PhD, of the Department of Viroscience at Erasmus University Medical Centre in Rotterdam, The Netherlands. “Virus attachment to Clara cells in the bronchioles and pneumocytes and macrophages in the alveoli correlates with high virulence.”

A third notable finding was a more concentrated attachment of H7N9 viruses in ciliated cells of the nasal concha, trachea, and bronchi, suggesting the potential for efficient transmission among humans. “However, the fact that the emerging H7N9 virus has caused infection mainly in individual human cases suggests that it has not acquired all the necessary properties for efficient transmission among humans,” notes Dr. Kuiken.

“Our results indicate that based just on the pattern of virus attachment the H7N9 currently emerging in China has the potential both to cause severe pulmonary disease and to be efficiently transmitted among humans,” says Dr. Kuiken. He emphasizes that attachment is only the first step in the replication cycle of influenza virus in its host cell, and that other steps, as well as the host response, need to be taken into account to fully understand the potential of these emerging H7 viruses to cause an influenza pandemic.