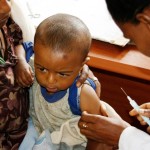 Ethiopia will begin protecting the 2.8 million children born in the country each year with a vaccine against rotavirus, which leads to severe, and often fatal, diarrhoea.

The country has one of the greatest burdens of rotavirus in the world, accounting for 6% of all rotavirus-related deaths globally. Ethiopia is the 17th country to introduce rotavirus vaccines with GAVI Alliance support.

“Few things in the world have a greater impact on public health than vaccines,” said Dr Seth Berkley, CEO of the GAVI Alliance. “Rotavirus vaccine offers the best hope for preventing the deadly dehydrating diarrhoea caused by this disease and preventing thousands of deaths of young children in Ethiopia.”

“Diarrhoea takes the lives of more than 38,500 Ethiopian children under-five each year, rotavirus being responsible for close to two-thirds of the deaths,” said Ethiopia’s Minister of Health, Dr Admasu Kesetebirhan. “Providing rotavirus vaccines to our children and integrating them with appropriate diarrhoeal disease control interventions will further support our efforts to reduce child mortality.”

Ethiopia has undertaken significant work to introduce the rotavirus vaccine nationally. It has significantly expanded its cold chain facilities nationwide and deployed health extension workers to provide immunisation services in each village with at least 5,000 people, in a country with 84 million people spread across 1.1 million square kilometres.

“Ethiopia has a policy of reaching the hard-to-reach parts of the country and focusing on prevention of disease, health promotion and transferring responsibility to individual families,” said Dr Kesetebirhan.

In September, Ethiopia and UNICEF announced that the country had reduced its under-five mortality by two-thirds between 1990 and 2012 – the required reduction for meeting the target of Millennium Development Goal 4 (MDG 4) on child survival.

“Ethiopia is becoming a development leader on the African continent, the success is driven by political commitment, advances in science and technology and improvements in health, nutrition and family planning services, particularly in the rural areas,” said Dr Peter Salama, UNICEF representative in Ethiopia.

The GAVI Alliance has worked with Ethiopia since 2001. Two years ago, with GAVI support, Ethiopia introduced pneumococcal conjugate vaccine to protect children against the leading cause of pneumonia. Earlier this year, Ethiopia conducted supplementary campaigns against measles and in October introduced meningitis A vaccine, also with GAVI Alliance support.

The World Health Organization (WHO) underscored Ethiopia’s progress. “Recently, immunisation programmes from central to regional levels were strengthened following a survey that showed a drop in immunisation coverage figures,” said Dr Pierre M’Pele-Kilebou, WHO Representative to Ethiopia. “There has been major improvement in the cold chain system as new vaccines are introduced.”

In addition to the support it receives from GAVI and Development Partners, the Government of Ethiopia also allocates domestic budget to procure other vaccines such as BCG, tetanus, measles and co-finances a matching budget to procure vaccines supported through GAVI funding.

GAVI and its partners plan to support the introduction of life-saving rotavirus vaccines in at least 30 of the world’s poorest countries by 2015.

Globally, rotavirus is the leading cause of severe diarrhoea in children under five years of age, killing more than 450,000 children each year and hospitalising millions more. In GAVI-eligible countries, where 95% of deaths due to rotavirus occur, the implementation of rotavirus vaccination has the potential to save the lives of more than 800,000 children between 2011 and 2020.