Groundbreaking new vaccine will save lives in Somalia 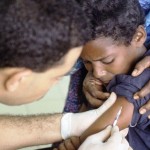 A new vaccine launched in Somalia is one-jab armour against five preventable diseases.

At the Medina Mother and Child Health Centre in Mogadishu, 6-month-old Abdul Wahab sleeps peacefully in his mother’s arms. Unbeknownst to him, Abdul has just become one of the first children in Somalia to have a jab that will protect him against five diseases – and greatly increase his chance of surviving past his fifth birthday.

Vaccination rates in Somalia are low. The preliminary results for UNICEF’s Multiple Indicator Cluster Survey for 2011 show that only 11 per cent of children in Somaliland and 7 per cent in Puntland received three doses of the DTP vaccine before their first birthdays.* DTP protects against diphtheria, whooping cough and tetanus.

In addition to offering Somali children protection against the DTP diseases, the vaccine offers protection against Hib (haemophilus influenza type B), bacteria that can cause pneumonia and meningitis, and hepatitis B, a serious liver disease.

More than 1.3 million pentavalent vaccines will be available to Somali children this year. Each child will require three doses before her or his first birthday.

Breaking the cycle of unnecessary deaths

At the launch at the presidential palace in Mogadishu, Minister for Human Development and Public Services Dr. Maryan Qasim told guests that Somalia has the second highest infant mortality rate in the world, with nearly one in ten children dying before the age of 5. She called the introduction of the vaccine “historic”.

“As a Government, we cannot rest until we reach all Somali children,” she said. “We are committed to reach every child in every corner of the country.”

UNICEF Somalia Representative Sikander Khan said he sincerely believed the new vaccine would make a difference, especially as pneumonia is one of the main causes of deaths for children in Somalia.

“Even one preventable death is one too many,” said Mr. Khan. “And that is why we are here today. This breaks the cycle of unnecessary deaths in Somalia.”

Anne Cronin of the GAVI Alliance said that it was important that all children in Somalia have access to the pentavalent vaccine.

President of Somalia Hassan Sheikh Mohamud said that one of the Government’s main priorities is improving the health of mothers and children.

“The Somali child must get clean water and vaccinations – everything his rich counterpart elsewhere receives,” he said. “UNICEF, WHO and GAVI have been with Somalia for more than 20 years and have lost staff and property and faced threats and challenges to save Somali lives.

“On behalf of the Somali people and on my own behalf, I would like to say thank you very much,” he added.

“We can fight against the child killer diseases with vaccination,” he said. “As the people have weapons to protect themselves, our body also needs protection, so vaccination can help our children to exist.”

Head of Paediatrics at Benadir Hospital in Mogadishu Dr. Lul Mohamed said the key to success was increasing coverage of the vaccines.

“We need a strong awareness drive to tell mothers about the importance of the vaccine and to motivate them to come. That also requires a strong commitment from the Government,” she said.

In fact, little Abdul was brought to the Medina Mother and Child Health Centre because his four elder siblings, who had not been vaccinated against any diseases, all caught measles.

“After the older children fell sick, I came to hear about vaccinations,” said his mother. “Now I know that this boy, my last born, should have all the vaccinations to protect him.”

*The survey was not carried out in central south Somalia because of security and access issues.