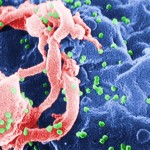 A Canadian researcher, Dr. C. Kang and his team at the University of Western Ontario, have produced an anti-HIV vaccine that is somewhat different from previous ones. The vaccine has just finished the FDA Phase I Clinical Trials and shown promising results. Next, it will have to begin Phase II trials.

The previous vaccines, that were made to try to prevent HIV infection, just used selected antigens (parts of the virus that would, presumably, cause a good immune response in humans) after injection of the antigens. These were just tiny fragments of the virus, not the complete particle itself. However, these earlier vaccines either didn’t produce a strong enough immune response to confer immunity, or didn’t produce high enough antibody titers in enough of the vaccinees, or had undesirable side effects.

This vaccine is made from the whole, killed virus.

Since HIV mutates so rapidly, the researchers needed to select antigens that were always going to be found associated with HIV in a form the vaccinated patient’s immune system would recognize. They selected appropriate candidates to use as antigens, but the results were less than optimal. HVTN 505, the most recent HIV vaccine, was deemed not effective enough and injections were halted this year.

This vaccine is made from whole HIV virus, not fragments. Many other vaccines (like rabies) use whole, killed virus and these vaccines produce good antibody titers in the vaccinees.

There are some specific technical problems with trying to make a vaccine from whole, killed virus. Also, people were worried about the risk of accidentally having some live virus present. If that were the case, the vaccine might cause HIV in the recipients. This vaccine uses HIV that has been genetically engineered to make it non-infectious, even if it were not killed by gamma ray exposure.

The Phase I trial was done in HIV positive individuals as an added precaution. The volunteers had an initial physical exam and laboratory testing done. Those who passed this screening were given the vaccine. Antibody titers were measured both pre- and post-injection of the vaccine. Antibody to the p24 capsid antigen increased as much as 64 times the patients’ initial levels and antibody to gp120 surface antigen increased up to eight times higher than initial titers. And these antibody levels remained high throughout the year that the trial was run. Both of these antibodies play a role in neutralizing HIV. And there were no major side effects or reactions to the vaccine reported by the volunteers. These results are very promising. Good antibody response that remained high and minimal side effects.

There are a few hurdles still in the way.

The Phase II and Phase III trials still have to be run. That means recruiting reliable volunteers who are HIV negative, recruiting clinical investigators, finding sites to host the trials and raising the necessary to do all of this. It’s estimated that to run the Phase II and III trials, it will cost about $70 million. So the research team and sponsoring company have invited major pharmaceutical houses to buy into the project. As a back up, they are soliciting government funding and also looking for funds from foundations and charities. So until some initial funding is secured, Phase II trials won’t be able to start. And even if funding is secured within a few months, it would still take about a year to get the Phase II trial set up and ready to run.

Also, the trials are run sequentially, so Phase III can’t start till Phase II has concluded and those data have been evaluated. Even if the trials show acceptable results, it will still take several years before the vaccine is available. Though the FDA does have the option to “fast track” the studies and approval, even with that being done, it would still be three or more years before vaccine could be distributed in the US. However, in countries that do not have as stringent testing regulations as the US does, the vaccine might be available sooner if the data from the trials is good.

Now, it is also true that other HIV vaccines have been through Phase II and Phase III and then been deemed failures (also, keep in mind that this isn’t the only vaccine in the pipeline right now – there are others in trials, but this one does look particularly promising so far). Even some early anti-HIV vaccines (1990s) at least made it through Phase II. And later vaccines got to, and some finished, Phase III. However none of the previous ones were whole, killed virus. If your vaccine is only made up of a few antigens types, like gp120 and p24, the body will only, at best, build antibodies to both of those. If you inject whole virus, the body’s immune system may find multiple parts of the virus to be antigenic and build several different types of antibodies, like anti-gp 120 and anti-p24 plus anti- X, anti-Y, anti-Z, anti-etc. Sometimes, the more different types of antibodies that get built, the more effective the vaccine can be.

Also with this vacc, AB titers to gp 120 and p24 increased significantly. The 64X increase in p24 in immunized patients is a really BIG increase, and an 8X increase in gp 120 is good, too. And no major side effects reported.

No promises that this will be an AIDS killer, but it’s very promising so far. So there is the possibility of a working anti-HIV vaccine in the future, unfortunately just not in the immediate future.