How viruses use ‘fake’ proteins to hide in our cells 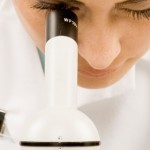 Some viruses can hide in our bodies for decades. They make ‘fake’ human proteins that trick our immune cells into thinking ‘everything is awesome’, there’s nothing to see here.

Now researchers at the Imaging Centre of Excellence at Monash and Melbourne Universities have determined the basic structure of one of the two known families of these deceptive proteins.

Using synchrotron light and working with a common virus that lives in people happily and for the most part harmlessly, they worked out the structure of the fake proteins. This is an important first step towards producing better vaccines and drugs to fight viral disease.

The research was posted online this week by the Journal of Biological Chemistry. It will appear in the September issue of the journal. The paper describes the structure of m04 immunoevasin from mouse cytomegalovirus, a member of the m02 protein family.

Cytomegaloviruses belong to the herpesvirus family whose members can cause glandular fever, chicken pox and cold sores. About half the population become infected with the virus, develop flu-like illness and then carry the virus for life. But the virus can be dangerous to pregnant women and people whose immune system becomes suppressed.

The mouse variant is an important model for understanding how this family of viruses can hide from our immune systems.

“Our work highlights how these viruses mimic the immune system in order to evade it,” says Monash University’s Dr Richard Berry, a senior author of the paper. He works in a research group led by Prof Jamie Rossjohn, the other senior author and a Chief Investigator of the Imaging Centre.

Mouse and human immune T-cells patrol our bodies checking on the health of cells. One of things they look for is a complex of proteins on the surface of cells. This major histocompatibility complex (MHC) presents a snapshot of what’s inside the cell. If bits of viral protein are detected by the T cells, they flag the infected cell for destruction.

Viruses fight back by disrupting the production of the MHC protein complex, thus reducing the numbers on the outer membrane.

But then, the next stage of what could be described as an evolutionary arms race kicks in. If there are too few MHC proteins on the outer membrane of a cell, then a different type of immune cell, termed the natural killer cell, will kill the cell just to be safe.

Cytomegaloviruses have responded to this by making large families of fake cellular proteins that interfere with natural killer cell recognition. It is the basic structure of one of these families that Rossjohn, Berry and their colleagues have become the first researchers to reveal.

“It’s been a race against our international competitors which we won with the help of the Australian Synchrotron,” Rossjohn says. “We were only able to produce very small protein crystals from which to solve the structures—too small to allow us to gain meaningful data with anything other than synchrotron X-rays.”