Inhalable vaccines for the flu and pneumonia use nanoparticles for painless access, extended shelf life 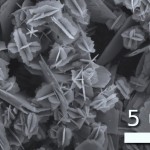 Hoping to avoid the refrigeration costs and pain brought on by injectable vaccines, a team of scientists from North Carolina State University and the University of North Carolina at Chapel Hill have teamed up to develop a nanoparticle version of certain vaccines that patients can one day inhale. The team’s study is published in the Proceedings of the National Academy of Sciences.

The new vaccine vehicle relies on tiny nanoparticles, which the team says is an improvement on the needle-and-serum method because impoverished countries typically don’t have the means to house vaccines for extended periods of time. The new version also holds the potential to improve patient satisfaction since it makes no use of needles. Instead, patients can inhale a predetermined dosage to combat illnesses of the lungs, such as influenza and pneumonia.

“Administration through the inhaled route mimics the natural path of infection for airborne pathogens and will activate the immune cells that would normally come in contact with these pathogens,” said Dr. Cathy Fromen, a chemical engineering researcher from UNC, to Medical Daily. Throughout the body are hundreds of lymph nodes, which trigger immune responses. When a vaccine gets injected, it can only target the lymph nodes in the surrounding area. For ailments related to the lungs this presents a problem. “However, delivering vaccines through inhalation affords strong immunity both in the lung and the blood.”

Pulmonary vaccination is emerging as a viable means for protecting people from viral invaders mostly because of key changes in the nanoparticles’ charges. The team found that those with a positive surface charge led to an increased antibody response, while the negatively charged particles led to weak, or sometimes nonexistent, immune system responses. Loaded with proteins found in the vaccine, the particles can then be inhaled normally, Fromen says, such as with the use of an inhaler.

While the U.S. sees a yearly spike in influenza cases, third-world countries are hit hardest by the virus. In 2009, for example, the world saw one of the worst flu pandemics in history. According to the CDC, between 105,700 and 395,600 respiratory deaths occurred, and 46,000 to 179,900 deaths were attributed to cardiovascular complications. These deaths were not directly a result of the flu, but stemmed from issues the virus can cause.

Fromen suspects a powder form of a vaccine will be most valuable to these underdeveloped regions. Nanoparticles mimic the size and shape of viruses and bacteria, which allows the body’s immune system to recognize them, trigger a response, and effectively use the nanoparticle decoy to eliminate the actual invaders. Another upside is a solution to scarcity.

“In addition to pathogen mimicry, nanoparticles also allow for dose sparing,” Fromen said, “which means less vaccine would be required per person and this is especially important for vaccines with high cost of production.”

Or, at a more basic level, if you suffer from needle phobia, the new powdered form could help bring vaccines in a user-friendly vehicle at a consistent dosage — that is, if people get it in the first place.