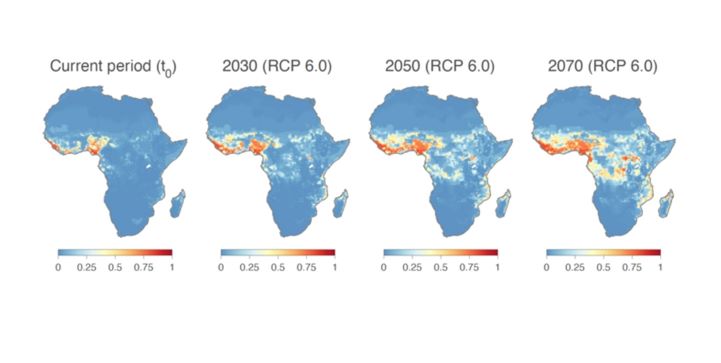 In the study, which appeared on September 27 in Nature Communications, scientists analyzed decades of environmental data associated with Lassa virus outbreaks, revealing temperature, rainfall and the presence of pastureland areas as key factors contributing to viral transmission. The researchers projected that areas hospitable to Lassa virus spread may extend from West Africa into Central and East Africa in the next several decades. With this expansion and expected African population growth, the human population living in the areas where the virus should—in theory—be able to circulate may rise by more than 600 million.

“Our analysis shows how climate, land use, and population changes in the next 50 years could dramatically increase the risk of Lassa fever in Africa,” says first author Raphaëlle Klitting, PhD, a postdoctoral researcher at Scripps Research during the study.

Klitting is a member of the laboratory of study co-author and Scripps Research professor Kristian Andersen, PhD. The study’s senior author was Simon Dellicour, PhD, of the University of Brussels.

Lassa virus is a “zoonotic” virus that spreads to humans from other animals—in this case, the Natal multimammate rat (Mastomys natalensis), most likely via its droppings. While an estimated 80% of infections are mild or asymptomatic, the remaining cases are more severe, with signs and symptoms that can include hemorrhaging from the mouth and gut, low blood pressure (shock), and potentially permanent hearing loss. The fatality rate for hospitalized patients is generally high, sometimes reaching 80%.

An estimated several hundred thousand infections occur each year, chiefly in Nigeria and several other West African countries. So far there is no approved vaccine or highly effective drug treatment.

Although the primary animal reservoir for Lassa virus is known, the virus spreads in only some—not all—areas where these animals are present. Thus, it is possible that environmental factors also help determine whether and where significant viral transmission can occur. In the study, the researchers developed an ‘ecological niche’ model of Lassa virus transmission, using data on environmental conditions at sites of known spread.

Combining the model with projections of climate and land-use changes in Africa in the next several decades, as well as the known range of the Natal multimammate rat, the researchers estimated the areas of Africa that could support Lassa virus transmission currently, and in the years 2030, 2050, and 2070. The projected current areas corresponded well to known endemic areas in West Africa, but the estimates for future decades suggested a vast expansion within and beyond West Africa.

“We found that several regions will likely become ecologically suitable for virus spread in Central Africa, including in Cameroon and the Democratic Republic of the Congo, and even in East Africa, in Uganda,” Klitting said.

Currently Africa’s population is undergoing rapid growth; the researchers therefore considered projections of this population growth for the areas of current and potential future Lassa virus circulation. They found that the number of people potentially exposed to the virus could increase from about 92 million today to 453 million by 2050, and 700 million by 2070—a more than 600% jump.

More hopefully, the researchers examined the dynamics of the spread of Lassa virus using data on sequenced viral genomes sampled at various locations in West Africa and found that virus dispersal appeared to be slow. They concluded that, unless transmission dynamics change drastically in the new location where the virus circulates, the virus’s spread into new ecologically suitable areas in the coming decades may also be slow.

The authors say that the findings should inform African public health policies, for example, by encouraging officials to add Lassa virus to lists of viruses under epidemiologic surveillance in parts of Central and East Africa.

The study is also the result of an inter-disciplinary approach involving molecular and evolutionary analyses as well as ecological and climate modelling.

“With the ongoing climate change and increasing impact of human activities on the environment, further comprehensive studies of the ecology and spread of zoonotic and vector-borne diseases are needed to anticipate possible future changes in their distribution as well as their impact on public health,” Dellicour says.

Reference: The study, “Predicting the evolution of the Lassa virus endemic area and population at risk over the next decades,” was funded by the National Institutes of Health (U01AI151812, R01AI153044, U19AI135995), the European Union, the Wellcome Trust, the German Federal Ministry of Health, the Global Health Protection Program, the German Research Foundation, the Research Foundation – Flanders, and the Belgian Fonds National de la Recherche Scientifique.