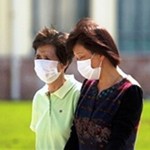 The patient is a 51-year-old woman from Huizhou, Guangdong Province. NHFPC reported the woman became ill on July 27, 2013 and was admitted to a local hospital a day later. She was then transferred to a hospital in Huizhou City on August 3. She is reportedly in critical condition.

According to state-owned Xinhua news agency, the woman, surnamed Chen, was a poultry slaughtering worker at a local marketplace in Boluo County for years. She has been listed in critical condition, but “remains conscious with stable life sign parameters.”

Doctors, led by Zhong Nanshan, director of the Guangzhou Institute of Respiratory Diseases, have worked up a treatment plan for Chen and will work feverishly to bring her back to health. As of Saturday afternoon, 54 out of 96 people who were in close contact with Chen had been cleared as safe. The patient’s son showed a low-grade fever Friday evening, but he tested negative for H7N9 and his temperature returned to normal early Saturday. The remaining individuals are still under close scrutiny, but have yet to show any signs of infection.

Liao Xinbo, deputy director of the Guangdong Provincial Health Department, said Guangdong still faces the risk of sporadic infections from H7N9 and the possibility of human-to-human transmission cannot be ruled out.

Xian Qi, with the Department of Acute Infectious Disease Control and Prevention, Jiangsu Province Center for Disease Control and Prevention, Nanjing, Jiangsu, China, and colleagues found a March 11 case of a 60-year-old man who became infected with H7N9 after visiting live poultry markets regularly. The researchers then found the man’s 32-year-old daughter had contracted the illness shortly thereafter. The woman had no known contact with live poultry and a genetic analysis revealed both her and her father’s strains were nearly identical.

While this find was startling, researchers note there still exists no sustained transmission of H7N9 between people.

After Chen’s diagnosis in late July, agricultural officials conducted tests on samples of all poultry including 69 chickens, eight ducks and one goose at the market where Chen had worked. All samples tested were confirmed negative for H7 viruses, according to officials.

China ceased emergency response to H7N9 in late May after the culling of millions of birds reportedly put an end to widespread infection from the illness, according to the United Nations.

However, the country still continues to monitor the situation, believing a possible outbreak could occur during the autumn and winter months, noted Deng Haihua, a spokesman for the NHFPC.

The WHO has been informed of a total of 135 lab-confirmed cases of H7N9 with 44 deaths. There are currently four patients still under hospital care, with 87 treated and discharged since the outbreak began this past March.