New weapon in fight against ‘superbugs’ 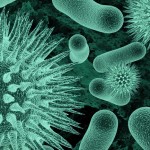 Some harmful bacteria are increasingly resistant to treatment with antibiotics. A discovery might be able to help the antibiotics treat the disease.

A soil sample from a national park in eastern Canada has produced a compound that appears to reverse antibiotic resistance in dangerous bacteria.

Scientists at McMaster University in Ontario discovered that the compound almost instantly turned off a gene in several harmful bacteria that makes them highly resistant to treatment with a class of antibiotics used to fight so-called superbug infections. The compound, called aspergillomarasmine A, or AMA, was extracted from a common fungus found in soil and mold.

Antibiotic resistance is a growing public-health threat. Common germs such as Escherichia coli, or E. coli, are becoming harder to treat because they increasingly don’t respond to antibiotics. Some two million people in the U.S. are infected each year by antibiotic-resistant bacteria and 23,000 die as a result, according to the Centers for Disease Control and Prevention. The World Health Organization has called antibiotic resistance a threat to global public health.

The Canadian team was able to disarm a gene—New Delhi Metallo-beta-Lactamase-1, or NDM-1—that has become “public enemy No. 1” since its discovery in 2009, says Gerard Wright, director of McMaster’s Michael G. DeGroote Institute for Infectious Disease Research and lead researcher on the study. The report appears on the cover of this week’s issue of the journal Nature.

“Discovery of a fungus capable of rendering these multidrug-resistant organisms incapable of further infection is huge,” says Irena Kenneley, a microbiologist and infectious disease specialist at Frances Payne Bolton School of Nursing at Cleveland’s Case Western Reserve University. “The availability of more treatment options will ultimately save many more lives,” says Dr. Kenneley, who wasn’t involved in the McMaster research.

The McMaster team plans further experiments to determine the safety and effective dosage of AMA. It could take as long as a decade to complete clinical trials on people with superbug infections, Dr. Wright says.

The researchers found that AMA, extracted from a strain of Aspergillus versicolor and combined with a carbapenem antibiotic, inactivated the NDM-1 gene in three drug-resistant superbugs—Enterobacteriaceae, a group of bacteria that includes E. coli; Acenitobacter, which can cause pneumonia and blood infections; and Pseudomonas, which often infect patients in hospitals and nursing homes. The NDM-1 gene encodes an enzyme that helps bacteria become resistant to antibiotics and that requires zinc to survive. AMA works by removing zinc from the enzyme, freeing the antibiotic to do its job, Dr. Wright says. Although AMA was only tested on carbapenem-resistant bacteria, he expects the compound would have a similar effect when combined with other antibiotics.

AMA was first identified in the 1960s in connection with leaf wilt in plants and later investigated as a potential drug for treating high blood pressure. The compound turned up in Dr. Wright’s lab a few years ago during a random screening of organisms derived from 10,000 soil samples stored at McMaster. The sample that produced AMA was collected by one of Dr. Wright’s graduate students during a visit to a Nova Scotia park. It was the only sample of 500 tested that inhibited NDM-1 in cell cultures.

“It was a lucky hit,” says Dr. Wright. “It tells us that going back to those environmental organisms, where we got antibiotics in the first place, is a really good idea.”

The McMaster team developed a purified form of AMA for experiments on mice injected with a lethal form of drug-resistant pneumonia. Treatment with either AMA or a carbapenem antibiotic alone proved ineffective. But combining the substances resulted in more than 95% of the mice still being alive after five days. The combination was also tested on 229 cell cultures from human patients infected with resistant superbugs. The treatment resensitized 88% of the samples to carbapenem.

Still, bacteria could someday find a way to outwit AMA. “I can’t imagine anything we could make where resistance would never be an issue,” he says. “At the end of the day, this is evolution and you can’t fight evolution.”