Study points out areas at risk for H7N9 virus 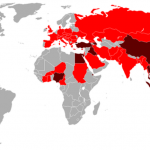 The H7N9 bird flu virus, which has caused severe illness and deaths in China, may inhabit only a fraction of its potential range and could possibly spread to India, Bangladesh, Vietnam, Indonesia and the Philippines, according to a study published in the journal Nature Communications.

The emergence and spread of the disease has been linked until now mainly with areas that have a high concentration of markets selling live birds, but it does not appear related to China’s growing number of intensive commercial poultry operations, it found.
An H7N9 “risk map” has been developed showing where human infections – so far caused mainly by contact with birds and not through human-to-human transmission – might occur next.

“The obvious use for such a map in the immediate future is to help target surveillance to areas most at risk, which could provide advance warning should the virus spread and allow authorities to move quickly to contain it,” said Tim Robinson, a scientist with the International Livestock Reasearch Institute’s Livestock Systems and Environment Program and a co-author of the study.

Areas elsewhere in Asia with conditions similar to those already affected in China, like places with a high density of live bird markets, could help the virus to significantly expand its range, warned Marius Gilbert, an expert in the epidemiology of livestock diseases at Free University of Brussels and the paper’s lead author.

At risk are urban areas in China where the virus has not yet occurred, as well as large swaths of the Bengal regions in Bangladesh and India, the Mekong and Red River deltas in Vietnam, and isolated parts of Indonesia and the Philippines, the study found.
The findings were based on analysis of data on the distribution and density of live poultry markets in China and of poultry production overall in the regions.

“We’re not saying these are areas where we expect to see infections emerge, but the concentration of bird markets makes them very suitable for infection should the virus be introduced there, and that knowledge could help guide efforts to limit transmission,” Gilbert said.

Unlike H5N1, the other virulent form of avian influenza emerged in recent years, H7N9 produces little signs of illness in birds, which means it could move stealthily into poultry populations long before people get sick, studies have shown.