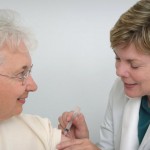 New form of vaccine also effective in persons with immunosuppression

A herpes zoster subunit vaccine (HZ/su) was associated with a high vaccine efficacy for adults over 50 compared with placebo, according to phase III results of an ongoing controlled trial.

This randomized, double-blinded trial was sponsored by GSK, but the authors note GSK Biologicals was not involved in the conduct of the trial, and “only data that would not risk participant-level unblinding were shared with the authors,” they wrote in The New England Journal of Medicine.

Instead of a live-attenuated version of the virus, like the current vaccine (Merck’s Zostavax), the recombinant subunit HZ/su vaccine uses an adjuvant (AS01) that activates specific antigens that may target the varicella-zoster virus (VZV), which causes herpes zoster.

Phase I and II trials for HZ/su showed efficacy in older adults and persons with immunosuppression – two groups where Zostavax has not shown the most effectiveness. The phase III study, Zoster Efficacy in Adults 50 Years of Age or Older (ZOE-50) trial, assessed efficacy of a two-dose HZ/su vaccine in an older population.

Herpes zoster was defined as new unilateral rash with pain that had no alternative diagnosis, the authors wrote. The disease was first diagnosed through polymerase-chain reaction (PCR) assay targeting VZV ORF62, with a lower limit of 10 VZV DNA copies per reaction:

Researchers measured the safety and reactogenicity of the vaccine through a subgroup consisting of all participants age 70 or older, as well as randomly selected participants from the two other age groups. The groups ranked their symptoms on a scale of 0 to 3, with 3 being the most severe (defined as “preventing every day activities.”) Symptoms were recorded 7 days following the vaccine.

Serious adverse events 30 days after the vaccine were reported in 87 (1.3%) of the HZ/su group and 97 (1.1%) of the placebo group, though only four were determined that the event was caused by the vaccine (hypotension with syncope, mononeuritis, neuro-sensory deafness, and musculoskeletal chest pain).

Limitations to the study include the makeup of the study, which includes investigators employed by the company sponsoring the vaccine. The authors also note a concern about the association of adjuvants with immune-mediated diseases, though they conclude “We found no evidence that immune-mediated diseases occurred more frequently among HZ/su recipients than among placebo recipients.”

In an accompanying editorial, Jeffrey I. Cohen, MD, Laboratory of Infectious Diseases at the National Institutes of Health in Bethesda, Md., also points out the potential for immune-mediated diseases in the elderly who receive the vaccination. He also writes that the higher rate of systemic adverse reactions was 2.2 times higher in the HZ/su group than the placebo group, unlike the live attenuated vaccine, where the rates were nearly equal.

Cohen references an ongoing trial to compare the live attenuated vaccine with the subunit vaccine and says that more research is needed into HZ/su to determine the length of its effectiveness before another booster is needed.

But he comments that the HZ/su vaccine does appear to have value for immunosuppressive patients, such as those with HIV.

“The results for this vaccine are promising and may provide an important addition to vaccinations for an aging population,” he concluded.