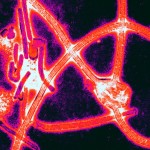 A device about the size of a small chocolate bar could offer a way to sequence the genomes of viruses.

When poor countries, with limited infrastructure, experience disease outbreaks – as happened with Ebola in West Africa – a device about the size of a small chocolate bar could offer a way to sequence the genomes of viruses and other pathogens right in those countries.

The device, MinION, has been developed by Oxford Nanopore Technologies, a U.K. based company, and utilises a proprietary method for doing the sequencing.

During a talk at the Molecular Virology Meeting that took place in Thiruvananthapuram recently, Thomas Hoenen, a postdoctoral researcher with the Laboratory of Virology at NIAD, in the U.S., gave a quick glimpse of using the device to sequence Ebola virus genomes in Liberia, one of the West African countries badly hit by the current outbreak.

Such genome sequence information was “very important” for a number of reasons, he pointed out. Molecular diagnostic techniques used nowadays relied on detecting telltale genetic signatures of the virus. So it was necessary to check whether those genetic markers continued to hold good. Moreover, some Ebola therapeutics currently being tested were aimed at counteracting specific viral genes.

Besides, getting the viral genome sequences “teaches us a lot of virus evolution during this outbreak, which is really unprecedented in its length,” he said.

However, there were only limited genome sequences available from the current Ebola outbreak. A major reason for this was that it was “extremely politically and logistically challenging” to bring patient samples out of the affected countries to laboratories where the virus could be sequenced.

“So we decided to try the other way round.” But the challenges involved in bringing available sequencing machine into Ebola-affected countries and getting them working there were formidable, remarked Dr. Hoenen.

“More or less by coincidence, when we were looking on the Internet [for] what else is out there, we stumbled upon this very new technology,” which is not yet commercially available. MinION is “an incredibly small device” and also very simple to use. The device, along with all the chemicals and materials needed for it, “can easily be brought into a country by a single person just using checked luggage on a commercial airplane,” he said.

Earlier this year, he took the MinION, along with its necessary paraphernalia, to Monrovia, the capital of Liberia. “I then spent about two and a half week testing this technology,” sequencing viruses found in 15 samples taken from patients.

As a paper about the viruses sequenced there is being prepared for publication in a journal, Dr. Hoenen gave few details about what he found. “The bottom line is that this technology works extremely well, even in the very primitive conditions that we had in Liberia,” he noted.

A key motivation for field testing MinION was to have a technology that can be very rapidly taken into countries affected by future disease outbreaks, Dr. Hoenen later told me.