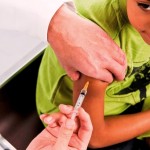 A new study suggests an additional—and somewhat surprising—potential benefit of vaccinating children against rotavirus, a common cause of diarrhea and vomiting. Besides protecting kids from intestinal illness caused by rotavirus, immunization may also reduce the risk of related seizures, according to findings published in Clinical Infectious Diseases and available online.

Lead study author Daniel C. Payne, PhD, MSPH, from the Centers for Disease Control and Prevention (CDC), and colleagues from CDC and other institutions carried out a retrospective analysis that included roughly a quarter of a million U.S. children born between March 2006 and November 2009. All were enrolled in the Vaccine Safety Datalink, a nationwide project that collects data for vaccine safety research, and included 186,502 children fully immunized against rotavirus (74.4 percent) and 64,099 who were not (25.6 percent).

The researchers found that children who were fully vaccinated against rotavirus had an approximately 20 percent reduced risk of seizure-related hospitalizations and emergency department visits during the year following vaccination, compared to unvaccinated children. “The protective association we found between rotavirus vaccination and seizures is another good reason for having your child fully vaccinated against rotavirus,” Dr. Payne said.

Although several mechanisms could explain the protective association, the most probable, the study authors wrote, is that “vaccination directly prevents systemic rotavirus infection, including extra-intestinal complications involving the central nervous system.” Seizures have been observed in children with acute intestinal illness caused by rotavirus: A large multi-center Canadian study from 2007, for example, estimated that 7 percent of young patients hospitalized with rotavirus illness experienced seizures.

The authors of this latest study estimated that rotavirus vaccination could potentially save more than $7 million in U.S. health care costs each year by preventing approximately 1,000 hospitalizations and 5,000 emergency room visits for seizures among young children. “Caring for children who have seizures can be expensive and emotionally taxing for families,” Dr. Payne said. “Seizures sometimes lead to painful procedures, medication regimens, trips to the emergency room, or hospital stays.”

The reduction in seizure risk the researchers found complements the already well-documented benefits of vaccinating kids against rotavirus—declines in doctor’s office visits, emergency room visits, and hospitalizations for severe diarrhea—noted Geoffrey A. Weinberg, MD, of the University of Rochester School of Medicine and Dentistry, in an accompanying editorial.

“Work such as this not only is interesting scientifically, but provides yet another reason to strongly promote universal rotavirus immunization,” Dr. Weinberg wrote. “In addition, the work provides us an opportunity to reflect on the fact that sometimes, unexpected effects of vaccination are beneficial and are a cause for celebration, rather than the more commonly publicized concern for unexpected adverse effects.”