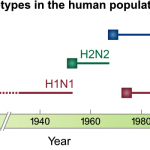 Circulating avian influenza viruses were recently shown to have genetic similarities to the pandemic Spanish flu virus of 1918, which resulted in an estimated 40 million deaths.

A team of researchers led by the University of Wisconsin-Madison’s Yoshihiro Kawaoke used public databases to identify eight genes from influenza viruses isolated from wild ducks that were similar to the 1918 flu virus.

The research, published in Cell Host & Microbe, shows that a future pandemic could potentially be caused by gene pools found in nature.

The team used reverse genetic methods to generate a virus similar to the 1918 virus, with only a 3 percent difference in the amino acids that make the virus proteins. The engineered virus was shown to be more pathogenic than the ordinary avian flu virus in mice and ferrets. It was, however, not as pathogenic as the 1918 virus and did not transmit in ferrets via respiratory droplets, as most flu viruses do.

The researchers also identified seven mutations in three viral genes that could allow the pathogen the same transmission efficiency as the 1918 virus.

Kawaoka said that knowing what genes to look for can make it easier to predict the possibility of a strain emerging. Additionally, the research suggested that currently available vaccines contain the possibility of protecting against potential pandemic threats.

The research also provides critical information on the mechanisms for adaptation of avian influenza viruses in mammals.

“With each study, we learn more about the key features that enable an avian influenza virus to adapt to mammals and become transmissible,” Kawaoka said. “Eventually, we hope to be able to reliably identify viruses with significant pandemic potential so we can focus preparedness efforts appropriately.