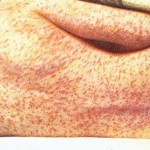 The Centers for Disease Control and Prevention announced that it had recorded the largest number of reported measles cases in the U.S. during the first five months of any year since 1994.

The CDC saw 288 reported cases of measles between January 1 and May 23.

Measles is an acute viral illness and a highly contagious respiratory disease. It is characterized by a high fever, malaise, cough and conjunctivitis, followed by a rash.

The disease is common in many parts of the world with 20 million cases estimated worldwide each year. Most measles cases this year were associated with international travel by unvaccinated people.

“The current increase in measles cases is being driven by unvaccinated people, primarily U.S. residents, who got measles in other countries, brought the virus back to the United States and spread it to others in communities where many people are not vaccinated,”

Anne Schuchat, an assistant surgeon general and director of CDC’s National Center for Immunizations and Respiratory Diseases, said: “Many of the clusters in the U.S. began following travel to the Philippines, where a large outbreak has been occurring since October 2013.”

In the United States, 90 percent of all measles cases were in people who had not been vaccinated or whose vaccination status was unknown.